Yesterday I had to go down to the Library so took my camera to get some pictures of a restoration work going on in the center of town.

Boonsboro is a very small town. Maybe 8,000 but growing. Very historic sitting right along the old National highway. The little flags they have on the light posts say 1792. So this is about the first hotel in the center of town. There is also a large Stone House on the top of South Mountain that was a days journey from one to the other,in wagons of course.

This hotel has never been in operation as long as I've been here. That's 50 years. There was an antique shop in it I think years ago. But then it really started going to pot. The pigeons took over the top floor. There was even a tree growing out one of the windows.

Well then came Nora Roberts to the rescue, I'm sure you have all heard of her, maybe read her books. She lives outside of town but her husband has a Book store in town.

I came the back way as I wanted a view of the back of it as they are working. 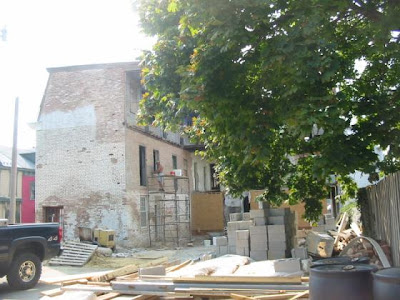 For two or three weeks they had dumpsters in there cleaning out. Took some added on stuff out of this back. Here's a closer picture. One brick layer up there patching. 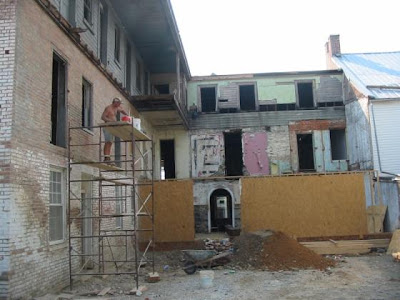 What a wonderful court yard this would make.
She is planning on restoring it and having the rooms set up with antiques. The worker said a Bed and Breakfast. But she has book signings about every couple months and brings in other authors as well and I imagine she would like a nice place for them to stay.

Then I walked up toward the square. Took this picture of the house diagonally across the street which she also bought at auction. It was apartments last but originally a large mansion. Her son is going to have a Pizza Parlor in it . They are almost finished with fixing it up. They painted it those colors. 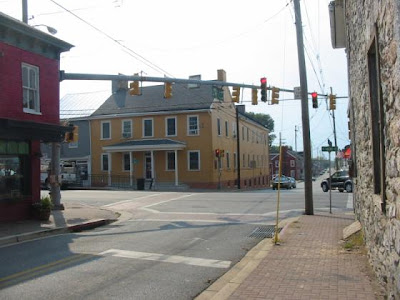 The stone wall here on the right is the first section of the hotel. I imagine the back part was added later.
I went across the street and took this next picture of the front of the hotel 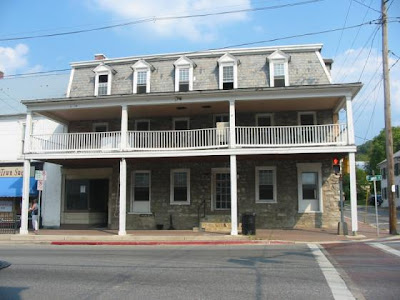 Boonsboro has one block of downtown. This next one was from in front of the Pizza house 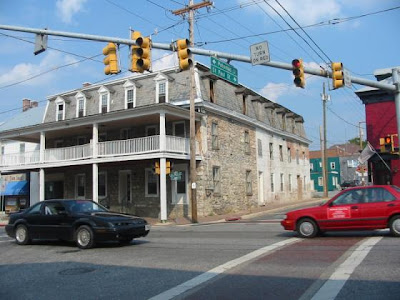 You
You can get a view of the front and side here. Pretty hard not to get come cars going though. 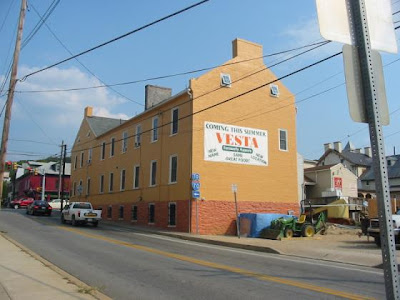 I walked down past the post office and got this view of the back . It is quite a large building. Don't know if he'll rent out the top or not.
Now back down main street a bit and got this shot from across the street of the Bookstore 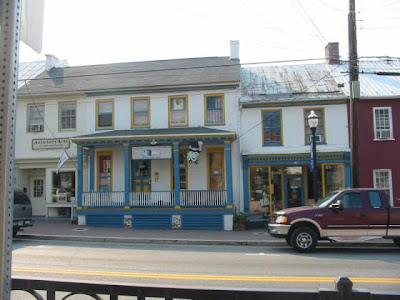 They really have three different houses here. The one in the center with the blue porch was the first one. Then they bought the little one on the left. Then expanding they got the one on the right which when we first came here was a hardware store.

When they have book signings the people are lined up clear up the street and no place to park. Nice for this little town.

I hope to get pictures as she gets more done.

What an interesting history of the town, Eileen! Gee, wouldn't a quilt shop in one of those buildings be great?! LOL!

Thank you so much for taking us for a walk through your town. How wonderful to see some of the older buildings come back to life!
*hugs*
Tazzie
:-)

You don't live in a little town... I do! We have 1,400. :-) Not such nice buildings like Boonesboro. I don't remember those buildings.... maybe we always arrived at night, after it was dark.

Those are great pictures, Eileen. I'm eager to see the hotel once it's finished.

This is the kind of progress I enjoy-restoring the past! Good for Nora! Is she planning romance, murder or witchcraft? At least you know it will have a happy ending!

Oh, I love these pictures and hearing what is going on in your town. Hope you will keep us posted. As for Nora, well, she should be swimming in dough, she doesn't need my $$ :-)

What a great little town -- so glad I've helped finance it with my purchases of Nora Roberts books over the years :0).

Seriously though, it's nice to see someone actually restoring the older buildings rather than just tearing them down and putting up concrete block buildings!