Here's one of my UFO tops from my basket. All machine quilted and bound. 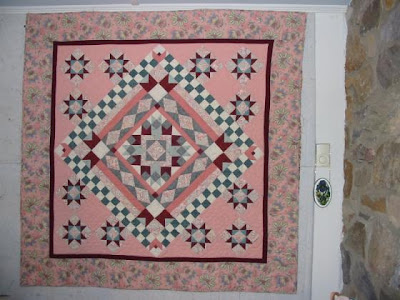 I've been thinking and thinking when I made this. I need Marcie's memory sponge.
Then it just dawned on me that it was probably a round robin I did in a small group about 4 years ago and that was as far as I got 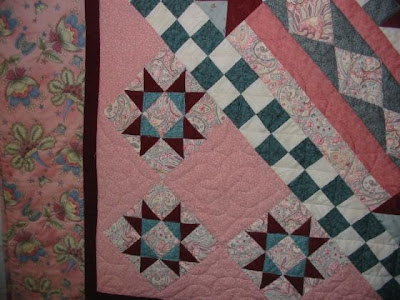 Here's a closeup of one corner. I don't know if you can see the quilting or not. Lots of free motion following a template of course. Except in the border where I outlined the flowers. that's what took time.

More about the hotel in Boonsboro. I noticed a Walking tour guide at the town hall which is next to the library and it has lots of information in it.
The hotel was #1 on the list and was called Eagle Hotel erected about 1796. Says the first stone building in Boonsboro.

Yes, It was named for the Boones but not Daniel. Probably a relative, They are buried in a cemetery behind the first church.

Now the other building across the street was the U.S.Hotel built in 1811. It was Dr.s offices for many years.

That's all of the history lesson for today.

I like your Round Robin quilt. You did a very nice job. I think I need one of those machines to try and learn to quilt my own quilts. You have learned so quickly.
Linda Z

For got to say I like the history lesson. Being a born & raised Marylander I love Maryland history. A Hoosier I will never be.
Linda Z

That really turned out nicely, Eileen! I started thinking and wondered if it could have been a round robin since you had mentioned being in a couple before. Very nice job quilting!

Your quilting is lovely Eileen!

That's "Memory Foam", Eileen! LOL! Your quilt is lovely! Are you doing the machine quilting yourself? It looks great!