A Few Snip Its 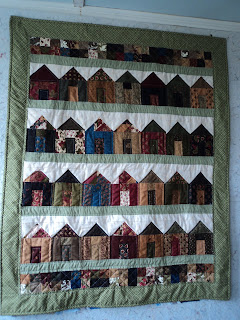 This is the last Schnibble that I did. When I got a snag in uploading the pictures into the blog I just gave up. That's why no blog for so long Sorry!

This one is called Fall Houses

I've given up on doing more Schnibblies right now although I did get 4-5 new
ones from Fat Quarter Shop. I just got so fed up with trying to upload the pictures from Picasa. Well while fooling around in there last night while not connected to the Internet I found the link to do it. 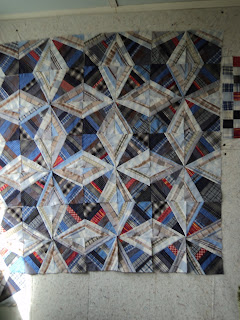 This is just a snip it of what I have finished  of DHs quilt from his old plaid shirts. It.s a pattern from Bonnie Hunters and Quiltville. I took a class from her the first of the year. Now I am down to the last row of blocks to finish off  5 of the stars with 4 wide. Will have another picture later when I get it uploaded to Picasa.
It seems the last two pictures I had uploaded didn't want to stay so will have to publish this and show them later. Just another Kids quilt and a pillow that a secret  pal made me. Am not sure whether or not I have shown it.

Since I wrote last, I took a long drive out to Ashland Ohio to see my other brother who is dealing with lung cancer.
It was the first time driving this by my self. Have made the trip many times with my husband. Since Ashland was where we met. in 1947.
Had 4 days to just sit and talk and remenance. Also spent a day with my sister's youngest daughter who left California many years ago to travel to Ashland to Collage. Like me and my brother she also found her mate and settled there. We had a great time.

Now I am back into a routine of swimming 3 times a week and also going to our new gym in Boonsboro, that Nora Roberts built behind the Hotel. Called FitInBoonsboro.
Am out on the circuit and walking the treadmill as many days of the week as I can. So am keeping busy. A good reason for not blogging much. Thanks for sticking with me.