This and That Catching up

.Here's a much better picture out my window this morning. We've had lots of rain and heavy winds and I'm surprised the leaves haven't all left 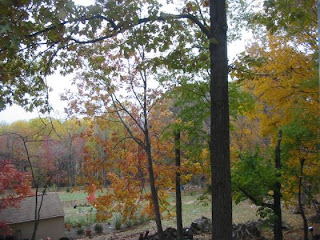 The tree that is still green is an old wild cherry tree and still bares cherries but this past spring the deer got them before the owner could .

Wed. I went to my LQS for Thimbleberries club and really had a mix up. I got there early enough to look around and get some fabric cut and picked up a few other things. I know all the people and said to just leave my pile and I would get it all after club meeting.

Well, when I came up I looked for my pile and said where is it.The fellow who works there full time said "OH was that one yours? Another lady in the club had gotten some things also and had them right next to it and he had rung it all up to her and she had paid it and of course by then had just left. Darn.

The only thing that couldn't be replaced is a yard cut of beige in one of the Christmas collection and it was the end of the bolt. Well, guess if she finds she didn't want that stuff I guess she will bring it back. She lives over in W. Va. but does get to the meetings.

They cut me the other pieces that I wanted and I gathered up some more needles and a blue pen and a couple other things. Got to get it all when I'm there. 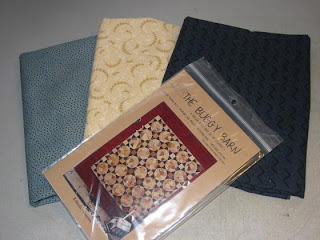 Here's the fabric I bought and the prize pattern I won. It's one of the Buggy Barn. This is her way of getting rid of patterns that aren't selling. I think.

Here's a picture of the coasters I made the last couple days for a Christmas gift. I used the Christmas fabrics for this one. The blue is the snowflake that is what the Snowmen were sewn onto. They are fun. Used some scrap batting and turned them. Stitched up the opening and quilted them a little 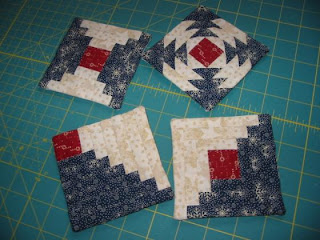 Then thinking of Christmas here's my Christmas Cactus in bloom. I bought this one last year.
Probably 30 years ago when my sister had a florist shop in Santa Cruz for Christmas she sent me this HUGE Cream colored Cactus. I had it for years. It was just too big for now though. I put them outside in the summer and they seem to thrive. 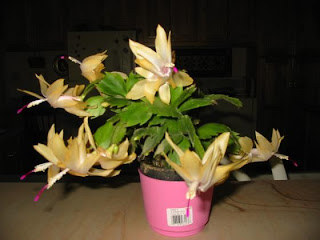 I saw red ones at Wal-Mart on Wed. and should have bought one. They are such small plants and get such huge flowers. The blossom only lasts about 3 days but this has loads of buds to come in time.

Don't know if it will still be blooming by Christmas or not.

Thanks for stopping by.
Posted by Unknown at 3:48 PM

Eileen, I wanted to thank you for your bravery, with Kim's help, of starting your blog. It is the first one I read every morning as it has such a wonderful calmness about it. Yet you get so much accomplished. Thank you and keep up the good work. I am out in California transplanted from Connecticut so the trees were a wonderful sight.

Oh my gosh, that lady with your pile of things is in for a surprise! I still have a bag of purchases from my little trip west a couple weeks ago. I opened it up on Friday and it was like seeing all new stuff that I didn't remember buying. LOL!

The little coasters turned out nice. What a thoughtful little gift they will make someone!

You have such pretty views. That's one thing I wish I had here, but don't. I guess I'll have to work more on my yard and make something pretty to view myself.