Finally after about a whole year I finished this hand pieced, hand quilted quilt. It was many years in the piecing so you can imagine how good it feels.
I have shown this a couple times but never in it's entirety. The first picture was taken on my wall so you can see how big it is. The wall is 7 ft. high and 6 ft. wide. 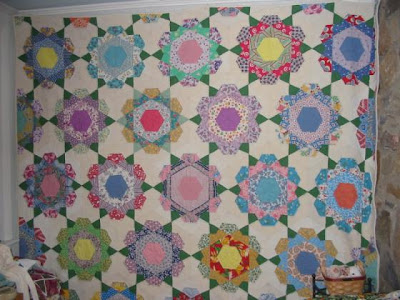 Then here is a closeup of a couple squares and the white centers which is what took me so long. 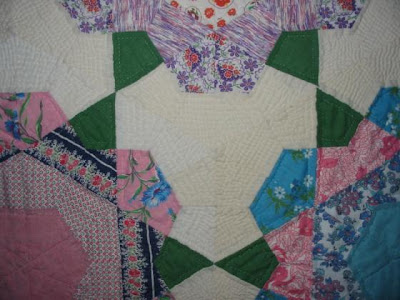 Since I only quilted the flowers 1/4 in. away from the seam I wanted something a little different for that large open space. It just didn't suit a template. Too many seams. so decided to use Echo Quilting. This is what the Hawaiians do on their applique quilts. Well, I had no idea how long it would take to do one of those blocks. I think I used close to 4 lengths of thread at least a yard long. Sometimes took me two different sittings to get one of those finished.
To go back a little, I saw this quilt made up at the Feed Sack convention one year they had it the same time as the Lancaster show and because I had been collecting feed sacks for several years I thought it fun to stop in. The lady who designed and made this quilt was there and showed that it was in the Tradtional Quiltworks Magazine, March 1996 issue, in full color and the instructions. I got that magazine and decided I had to make it.
Was a great project to do in the car as we traveled which we were doing then. Especially back and forth to Colorado. My husband always did the driving and with a collection of fabrics and all the necessary things I carried it along. Was surprising how fast they went together. 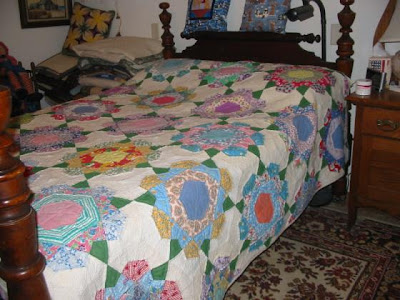 Now I decided it needed to be on MY bed so here are two pictures of it on my antique bed. 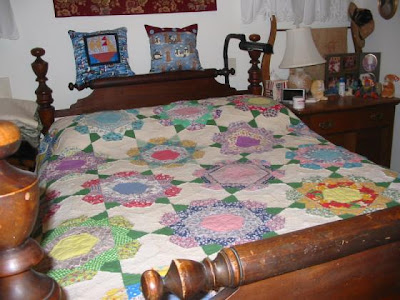 Eileen,
Your Quilt is beautiful. The hand quilting is remarkable. Your determination to finish, admirable.
Thanks for sharing!!

Lovely....I think the echo quilting is a great choice. You're right though, it does take a while, but the results are worth it. Thanks for sharing pics.

I thnk that your Rose Star quilt is one of the most beautiful I have ever seen. I would have to have it on my bed if I had made it, too.

What a stunning quilt - you ought to be very proud of yourself. I also like your antique bed.

Very pretty quilt, Eileen. I know how long you have worked on it, and it was well worth all of the time you have in it. You have a true heirloom.

What a gorgeous quilt Eileen, and what pretty echo quilting. It looks perfect together and is wonderful on your bed...
Thanks for sharing your beautiful hand pieced work- it is a lovely piece that I am sure that it will be a family treasure.
Thanks for coming to my blog and checking on me- I feel like I have a friend watching out for me.
Regards,
Anna

Your quilt is one of the mos beautiful quilts I've seen. It is truly a treasure.

What a wonderful quilt! It is such a great pattern and the handquilting is incredible!

OHH this quilt is gorgeous I love how you have handquilted the light areas with echo quilting this is awesome and a real inspiration.

This quilt it just so beautiful!! And the quilting awesome! What patience you must have. Thank you for sharing it with us. Elly