First off, hubby had to go back to the hospital on Sunday. He lost a lot of strength and went down a couple times. I had to call 911 3 times in two days. It turned out that his kidney's were not functioning like they should have. So now on Thursday he is still in there and probably will have to go back to Rehab. Think he likes it better there than at home. At least it is easier on me.
This is what I've been working on this week and am sick of squaring these babies up. 120 3 1/2 inch squares. Now on to the next ones. 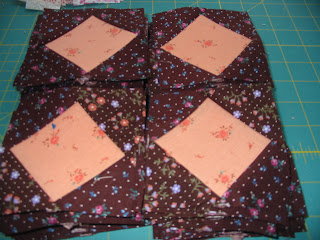 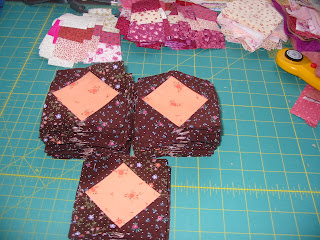 I just had to see how this was going to go together so made up one block of each. Looks funny this was on the wall I know but this is how they will go together on point. So I best get busy and sew some more strips together. 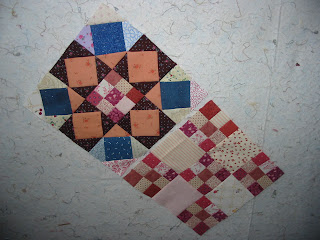 I wish I could think up crazy things to talk about like Kim and her spiders. Gee, they don't bother me . But we don't have big ones like she's talking about. What we do have is STINK BUGS. Not afraid of them, They buzz around and then might land on you. The only thing you don't want to do with them is squash them because they do STINK. Nothing kills them. So I do like one lady said in the newspaper. Put them down the toilet and they won't hurt anyone. They come out at night when the lights are on and buzz around the light. I've had them drop down on the quilt while I'm quilting.
To think some bright soul brought them over from China to eat something in the orchards of Georgia or some place in the South. They are graudally working there way North. They are suppose to eat plants but haven't seen an signs that they touched my african violets. Just go away .

Thanks for dropping by.
Posted by Unknown at 8:35 AM

Well, that was a short homecoming! Kidneys are pretty important. I hope he improves quickly. In the meantime, store up a little more strength for yourself.
Those are intriguing blocks you are working on...lotsa little pieces!

Well, you did make me chuckle when you shared about how to get rid of Stink Bugs. I am sorry to hear about your DH having to go back to the hospital and rehab. While he is being tended to there, I second what Lindah said about store up a little more strength for yourself. Your quilt blocks look great. Fun colours.

Well Your double delight is coming along nicely- it is a really pretty pattern that Bonnie has created.
Kim does tell some great stories - she makes me laugh too- I have never heard of Stink bugs - my kids at school would think that name is hilarious. Anytime you talk about something to do with bodily functions they find some way to turn into something funny.

I am sorry to hear about yur husband. Hope he is doing much better. I honestly think Kim missed her calling in life, she should be a comedian, not a legal secretary. Kim and Gran have told me about your blog, I am sorry it took me so long to join up. Here's hoping you have a great week-end, and keep up the beautiful quilting!

sorry to hear about hubby. hope he is on the mend soon. in the meantime, take time for YOU and take care of yourself.
the orange crush quilt squares are looking good.
and your garden is so nice.
Dawn in MA

I like the way your squares are turning out--now that I can see a photo, I know what you're up to! LOL! Yeah, keep your stink bugs there, please! Unless maybe they eat big, fat spiders?!

So sorry to hear about hubby. It's tough looking after someone and even tougher when you're not able to do it. Be thankful in the time you have been able and enjoy the break. Take time to do things for you. It's good for your soul and helps you rejuvinate. Hope hubby continues to improve day by day and you have a good rest.
By the way that new grandaby is due in three weeks so I'll let you know and send a picture!
Minniestitches

Well, at least he was home for a little while. Hope all goes as well as possible. Yep, we have stink bugs too...yuk!

wow!! seeing those brown blocks by themselves is so different then seeing them as a block they look wonderful!! love the progress you are making..I do hope each day brings your DH more strength.

I just discovered your blog via Kim's Quilting Adventures. I hope your husband is on the mend and your back is doing better too. I am really, really liking your Double Delights quilt. Where might I find that pattern, do you know? It's scrumptious! Nancy in WI