And The Winner Is--

Here's a Dutch Iris and some Coral bells to Vickie D. Please send me you address and I will get this pattern out to you Tuesday. 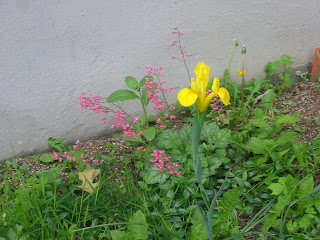 Yesterday I was looking at all the flowers that were blooming around the house and thought I would show you some of them. The Dutch Iris is on the south by the carport. This is a hill that I am trying to get vinca going on. Doing pretty good if the weeds and that grass would go away, Oh and the dandelions. 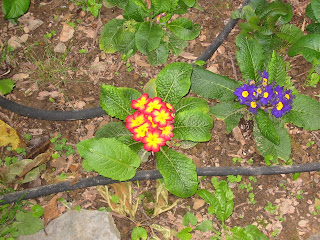 I just love the color of this Primrose. It is a new one I got this year and just keeps blooming. Now with the hotter weather coming on it will probably stop. That is a soaker hose I have going through the perennial garden. So much easier to keep them moist. 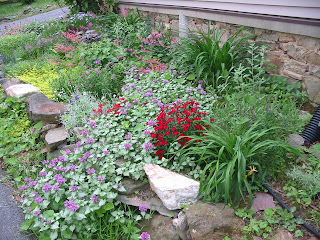 This is an over view of the perennial garden It has really filled in this year and the Dianthus are getting nice an big and full of blooms. Lots of Coral bells and columbine which have been gorgeous. 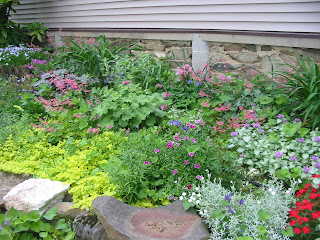 Another view That yellow ground cover I got the first of the season has really taken over, Might have to move some of it to my neighbors rock wall. She doesn't have any. 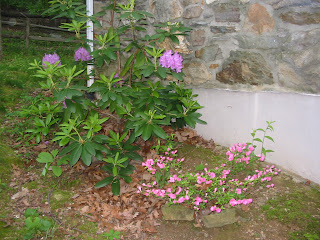 Going around to the North side of the house I have planted two Rhododendrons with this pink azalea in the middle. It is just starting to bloom. The Rhododendron is a pretty lavender. 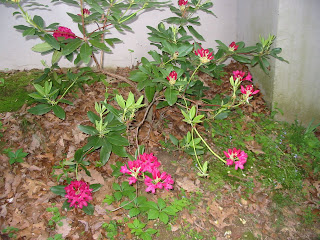 This is the other one and is a dark red. These in the front that are just opening are the ones the the deer ate the leaves. I wasn't sure the buds would open . 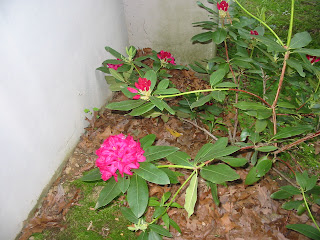 Here is another shot showing one that is completely open. Just wish this was around where it could be seen better.

Hubby has had some problems this week. Not as strong as he thought. I have had to call 911 twice to get him up. Hasn't really hurt himself except for scraping his arm . We are now going to get a ramp for the backdoor. He just couldn't make that last step.

I've been working away on the second set of square in square blocks for the Double Delight. It is going faster than the first set using scraps. Pictures later.

Thanks to everyone that wished me a Happy blogging. Hope I can make it to 300.
Posted by Unknown at 11:53 AM

I would like to personally Thank You for not picking my name. I have always had a terrible time with this type of pattern and when I saw your giveaway I debated quite a long time before entering my name. I thought if I won, I would pay the price to have a one-on-one class at a LQS to teach me. You have saved me the humiliation....

Love all of the flowers! What is the name of the red ones?

The perennial garden is really pretty Eileen- I love perennials and have some lilies and irises that will bloom later.
My tulips are finally blooming - everything is so late because of the cool weather.
I look forward to seeing your newest quilt - I am sure that it will be lovely.
Hope things get a bit better for your Hubby ..
Congratulations to Vicki for winning that very nice pattern-
Take care of yourself,
Regards,
Anna

Thank you for the lovely look at your gardens. They are nice to see. Perennials are fun and interesting to see how they will do each year.

It sounds like DH is struggling to regain his strength and falling - please take care of you too. I know you take the very best of care of him.

Thinking of you, and what adventure you might be having today.

Eileen I loved seeing your perennials. I have a perennial garden and an Iris Garden. Yours is lovely.

Sorry George is having such a rough time. Good that you didn't try to get him up when he fell. I am sure the EMT's were glad you called. Good that you are taking care of your back. Sure is tough getting old and definitely not for sissy's.

Anxious to see your new quilt. I have been doing binding on one of mine.

Your flower beds are lovely and so neat. Ohh, I have so much trimming to do!
Thank goodness for EMT's! I'm sure your hubby is anxious to regain his mobility. It takes time.
Blessings!

Great photos! It's been awhile since I've read your postings and it was interesting and fun to see your quilts and gardens! Wish I could come back and really see them! Don't know if this will let me leave a message or not but I will try. The new quilt is in the colors of my dresden plate! My first big quilt that you helped me with! Remember? If it wasn't for you and Grandma it would still be undone! I think I've only about 1/3 of Brian's quilt left to quilt. What a fun idea to have a drawing with your quilt friends. I will try and check you out more often. Roann