Since Kim keeps talking about me in her blog, I figured it was time to tell a little about how we met and why 2 women of a different generation have become such good friends.

First when Kim first joined Quilters Hollow of course I saw she was from Sacramento. Well, i was born just about 100 miles south in Turlock. So number one thing in common. I still have a sister living in Santa Cruz and have tried going out about every couple years to see her for a week. So when I said I was going to visit my sister, Kim said how about meeting in San Jose and she'd show us a couple Quilt shops. So it was arranged to meet at this quilt shop
right as you get into Csmpbell. 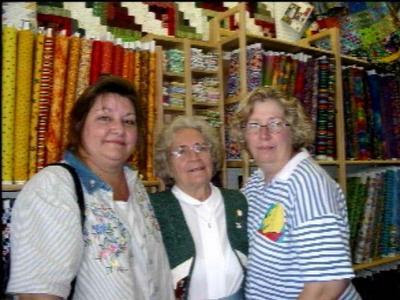 This is Kim on the left. Me in the middle and Kim's friend and fellow Hollow member, Nancy. My sister took this picture of us. Great shop. Found a lot of TB on sale.

From there we went in Kim's car to Sunnyvale to a wonderful shop which is now closed..

Then we drove to a place where we could park and look at the Mini quilts that Kim had been in charge of. They were all in and I had her name. She had not unwrapped her package. But did and this is a picture of her holding the 12" "Trip around the world" that I had made her. 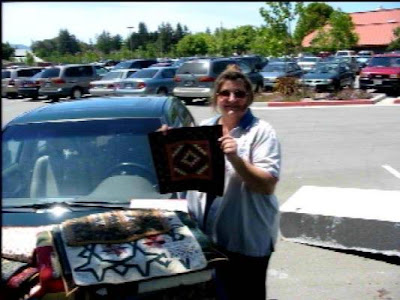 Later Kairle, who is the owner of the Hollow wanted to get some others to help her a little and asked Kim and I to take over the swaps and other activities, as she didn't have time. Why she picked us, I don't know, except we were probably the ones that talked the most.

In this process we found out that our birthdays were a week apart. I'm a week Older plus several years, Then when one would make a comment about something invariably the other would say almost the same thing. Really weird. But then you already know that Kim is weird.
I can't write the stories like she does though.
We both have two children, a boy and girl. But mine are both married and I have 6 grandchildren

We then met again 2 years ago at the Thimbleberries retreat in Mn. 17 Hollow members were there that year. That is probably the last time I will be able to travel as I can't leave my DH unless someone else stays with him.

Then this year for my birthday Kim sent me this quilt. I had commented How much I liked it.
Boy, was I surprised. What a Gal.
We email a couple times a day. 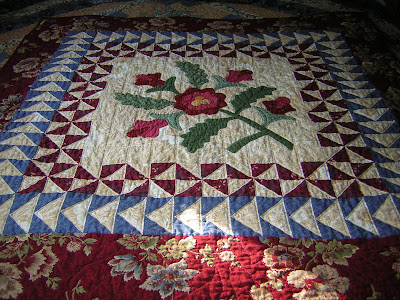 Here it is hanging above my bed. 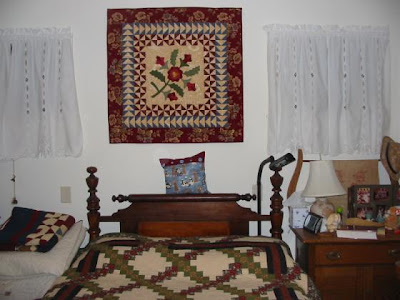 Doesn't this look great over my DH's great grandparents bed.?

Kim left this comment when uploading these pictures for me.

Wait a minute! Kim is weird?! ROFLOL! See, Eileen, you can tell a story and make it interesting! Thanks for being such a good friend--it's funny how much we have in common!

I suppose that makes you a pair of weirdos! Just remember, I'm NOT the one who said it...

On a serious note, I hope you'll be able to get someone to help you out so you can make the next retreat... wherever that may end up being.

You both remind me of my mother, who was also born in July... (and that's all I'm going to say about that!)

What a beautiful quilt and a beautiful friendship!! I've met all of my best friends quilting.

You and Kim are the greatest! She really is a great friend!!!

How fun to see a picture of you both. Isn't it funny how friendships can form across the miles. The quilt she made you is fabulous! So along with being weird, she has a soft side!