A View Of My World

Yesterday we had quite a wind, rain storm and after it was over I just had to take my camera and get some new shots. My how a couple days changed the looks of things around here. Leaves coming down like snow and now the yard is covered. 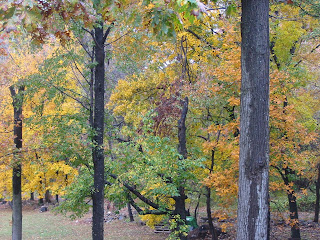 This is the view out the back which I normally don't take as there isn't any thing exceptional. But today the color is so vivid and notice the one little tree in the foreground with green leaves yet. That is a very old wild cherry and the neighbors were going to cut it down because of the top being dead. But when it bloomed and the cherries arrived and were so good, Rusty, the gentleman, said no way would he cut it down. Now he has to beat the deer to the fruit. The deer won this past spring.

This is the view out the carport right at the front of the house. It must be a red Oak as it has gotten so gorgeous but half the leaves are now on the ground as in this next picture. 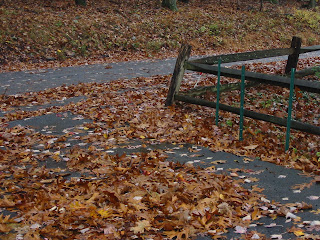 This is the drive in the early morning. By the end of the day they had blown away. Only a path down the road where the cars had gone was empty of leaves. This is the same way the snow gets.
Of course the front yard is covered and will have to be raked. It won't blow on down the hill with the house blocking the way. The three huge oaks in the front yard still have most of their leaves. But I love fall.
Now to show you what I have been doing the last few days, in my spare time.
A little explanation first.
After coming back from retreat I had a large plastic bag with strips cut. Had the directions for cutting that I had printed off the website. Suppose to have been a mystery quilt.
Well the one they did I really wasn't that crazy about so continued to make the butterflies. So asked about what these strips were for as I had to use them. The pattern didn't call for 4 1/2 in and 2 1/2 in strips. Then the gal in charge said they had changed their minds and that was to be using the Carrie Nation block on Quilter's Cache. So going in to look at it I really like it so this is what I'm doing
Four patches and lots of them 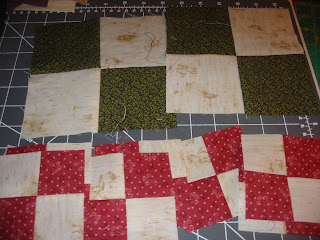 Large Green ones and small red ones. But even those cutting instructions were wrong. The large ones were for 3 1/2 in squares , strips and the smaller for 2 inch strips.
This is one set of two sets of strips cut and sewn into 4 patches. Easy and a good pick up for a short time. The worst thing is the squaring up of those 3 1/2 red and beige 4 patches. This is Thimbleberries fabrics. 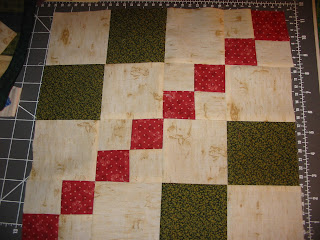 This is the block sewn together. 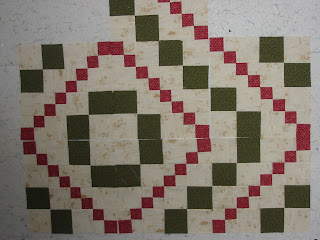 and this is the design as of now. Really neat. Sort of like the barn raising in log cabin.
So I need to continue and get more blocks sewn together. Not sure how big the amount of strips I have cut will do and I think I cut it all up. So stay tuned.
Things have been OK around here this week. DH has been a little weaker for the last couple days but that's the way it goes. He sees the doctor this coming Friday so I imagine more blood work. The last the Nurse took was fine. As long as the kidneys and Potassium is fine he should be also. course the blood sugar comes in there also. To morrow is back to the swimming excesses.
Hope your part of the world is going well also.

thank you for posting the pictures of the beautiful leaves. Fall is my favorite time of the year, and your pictures just confirmed this! Hope hubby continues to do well, and you take care also!

Hi Eileen,
I loved seeing all your beautiful colorful trees as the trees here did not turn much- they were green and then we had some snow. The snow all melted ( yes!!!) and the trees are losing their leaves without turning very much- It is too bad because our boulevards look gorgeous all yellow with a big overhang over the roads.
I am quite tired tonight as I helped clean out the backporch and did the stairwell so that we could get rid a bunch of stuff. We filled a big garbage bin with the overgrowth and clutter from the outside. We are going to do some other things inside so we will have to get another large bin to get rid of the clutter. We are making progress so that is the main thing.
Nice to know that your beloved is holding his own- Enjoy your water class.
Your new pattern is fun - I am sure you are creating another beauty.
Hugs,
Anna

Hello
I love the autumn pictures. It is neat the the old cherry tree is still there and giving you hope for a glorious spring of cherry blossom flowers. The leaves are even beautiful on the ground. Your quilt blocks are looking good. Our girl must be on the coast by now.