Yes, time has marched on and it has again been a busy week. At least now I have my Social Security done.

Remember that I had said that DD and I went shopping last week?  I bought material to make drapes for Hubby's former bedroom. The room just needed to be changed.

This is what it looks like now. Got those neat Battenberg valences and this floral fabric at Wal-Mart believe it or not.
There is a small window in the front that I have now got these Battenberg curtains for all of them. 5 windows across the front of the hoiuse. 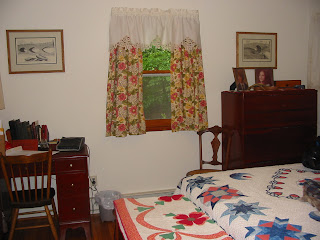 This is a shot of the bed and quilt that I was getting the orange flowers to match. It is mostly applique and all different pieced blocks in the outside border.
The Appiqued quilt folded on the cedar chest is an Antique One that I bought a number of years ago. Don't know who made it but it is perfect.
I wanted to show you what I had put on the wall opposite the bed. It is one I made years ago with lots of small quilts. Been hanging in the basement with the other two that I made after from patterns from the same lady that lived in Gaithersburg. Took a class from her to get started on them. 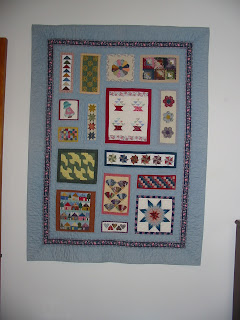 I am going to be going on a little trip tomorrow. My good friend Roben has a wedding to go to in Austin Texas and asked if I would like to go along for company. She will not fly so will be going in  her new Toyoto. Which has a bulit in GPS so we will not get lost.
Beside I told her I had a Grand nephew and his family in Austin so while she is at the wedding i will visit with them and their two small children.
Have been through Texas a couple times but never to Austin. Once through Dalles Fort Worth and another years ago to Houston  as I also have my oldest nephew there and a niece.
I hope to take my  laptop along and will see if I have time to take some pictures to show you along the way. Gee. it seems like ages since I was across country in a car. That is the only way we traveled together as my husband never would fly. I have flown to California and Colorado several times.
So now to go get my hair done and visit the attorneys office. It is a dreay day out as was yesterday here on the east coast. Suppose to go through tomorrow. So hopefully we will travel through it and have some nice HOT weather for a change.
Thanks for stopping and come back to see where I go.
Posted by Unknown at 9:17 AM

Have a wonderful trip - maybe you can check out some quilt shops while you're in Austin :o) Love your bedroom - those quilts look beautiful!!
Judie

Enjoy your trip and say HI to the cousins for me!

Such beautiful quilts! Hope you have a wonderful time on your road trip!

Have a wonderful,fun and safe trip. ANy chance to stretch it out to Northern California????? Just wishing! Take care, Hugs!!

Eileen,
it is so good to see that you are doing well. I know the sadness and heartache will stay with you but as time marches on, we all find things a little easier each day. I hope you have a wonderful trip and stay safe.

Your windows look so nice. The floral fabric is perfect with the quilts.
Have a wonderful trip!

The curtains compliment your room and the quilts. Who new you could find such nice fabric at Wal-Mart - ours is very, very poor quality.