Oh what a Beautiful Day

So this is what my perennial garden looks like when I got home from Texas . Had a great time with a great lady. She hadn't told me we were going to be stopping at a friends house below Fort Worth and do some cooking.
Yep she is the one that writes cook books mainly so far for those that have Celaic Disease. They can't eat anything with wheat in it so she tests receipes using other flours like rice, potato and baking powder for a few.
So now she is working on a book for Mircrowave baking. 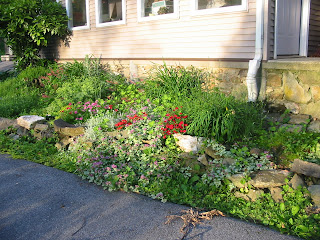 Here is the mainly quilty thing that I finished on the trip. I had shown this before but not since I quilted it and then did the binding on the trip. Had to wash is as some coffee spilled on it but did not hurt it. It is all Thimbleberries fabrics. 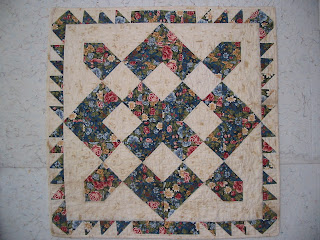 These pictures got in at the wrong place again. But this is the final product of the muffin done in the microwave for about 2 minutes. 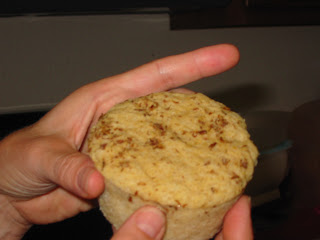 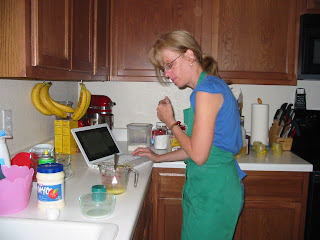 Here is Roben mixing and recording on her laptop what she is doing. Then mixes this in the measuring cup. Yes, she uses one egg and the rest of the ingridents and beats it up and puts it in the little pyrex bowl for baking. 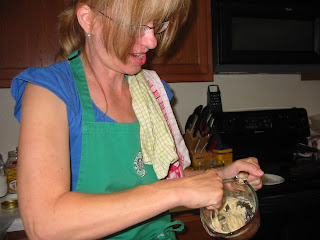 She also baked some chocolate cake. After several tries with the different flours she decided that was good. I thought I had a picture of them but I think that was when my batteries decided to go bad.

We  had stayed in this little town the night before and did get out in the afternoon to get a little lunch and do a little shopping. Have you ever heard of an eighth measuring spoon? I hadn't but with these little cakes you need one. When this book comes out next year I will tell you about it. I want to try this myself. Would be nice to be able to bake a small cake for just me and not have so much left to have to eat.

I did go into one quilt shop but was not impressed.

We left there about six and had a 3 hour drive to Austin and needed to find a hotel.  about in the middle of where her wedding was and where My grand nephew lived. That took some time as the first couple we stopped at were full for the weekend. OPPS what was going on. Yep, Graduation at the University.

Finally got one at the Hilton Garden Suites. A King size bed which was OK and a very nice room. The best thing of this trip was we both had laptops and was able to get online at every hotel we stayed at . So were able to keep in touch. I had hoped to post to the blog but was usually so tired that I couldn't think straight.


When we got there I was looking for my nephews phone number. I had their address but had left the card at home. So set out to try and get it. Found their name online but no number. I called my brother in Ohio and the number they gave me was disconneted. So Roben thought about Facebook. Finally , yes, lots of my relatives have a facebook page and set out to get the number. Seems nobody was online that night but finally in the morning my nephews sister-in-law  had it for me. Of course I got a lot more too. So Facebook is good for something.

Had a wonderful day with them and Anne took me to downtown Austin and showed me the sights. What a fun day and of course temperatures at around 90. We only had one day of rain on the way down. Beautiful coming home. But was I tired.

Thanks for dropping in and listening to my tale.
Posted by Unknown at 2:09 PM

Loved your "tale!" Just knowing that your were up for the adventure and were with such a good friend was evident in your posts. I was impressed that you had the energy to do what you did. Good for you! Your pictures do tell a story. The perennial garden is lush and beautiful. What a treat to come home to. ttyl Hugs

So glad to hear you are home safe and sound! You were missed!! Take care, hugs!!

It's nice to go, but it's always nice to get home again. I'm glad you had a good trip and a good visit with family.