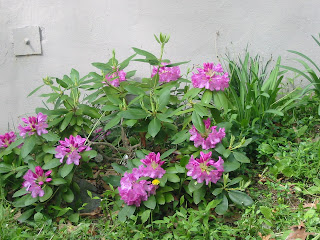 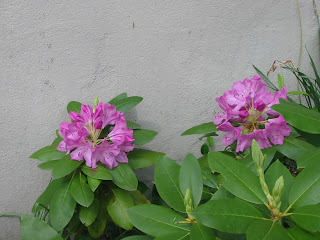 Yes, I have had a very busy 2 weeks. My son stayed until Tues, and then my daughter came back up Tueday evening. She had to go home as her two girls were both coming home for the weekend and she also had to get plans made for her class for the week. Her Principle had said she could take all the time she wanted. I seems I can't move these pictures as I would like.Seems that it will do as it wants.
This is my son before he left. we were taking pictures of the Rhoderdendron that are along the carport behind him.
The two quilts are both Schnibble's patterns. The orange and brown one I have shown before but it is now finished.  The other is one I have the top done called Tagalong. My friend Gran, the Embrodery Lady gave that pattern and another one to me when she visited. 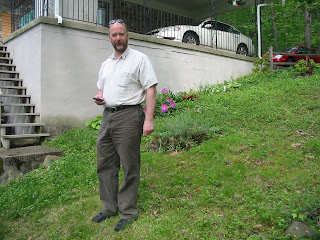 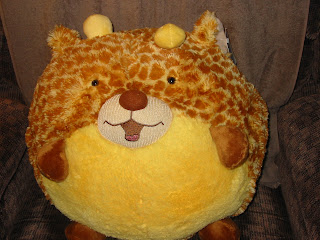 This is also George. On Thursday my daughter and I went shopping . After visiting the Board of Education, My Hubby was a retired teacher. The credit union to change names the court house with what I thought were his wills., Not but copies. I had to find the originals. In the lock box thank goodness. Then a bank where his SS was deposited.
Finally to the mall.  I wanted some new sheets for his bed that was brought back up from the basement garage.  Well DD happened to spot this pillow giraffe and saw it was named George. She collects Giraffe's and has for years. But not one named George. This is a 50 plus lady and she begged me to buy it for her. I said "NO"  I  went on looking at shorts and she said I'm going to get that Giraffe. Well,. he is seen sitting in her Father's chair. I guess it is George's Chair. See her Father's name was George as is her brother's.
She stayed until Sunday afternoon when she had to go pick up Dan , her youngest whose birthday was also  this week, turned 16. A good friend had asked him over for the weekend and it really worked at well 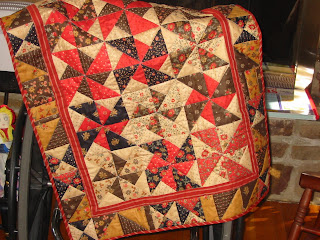 See I have the binding on it now. Have it laying over the wheel chair, 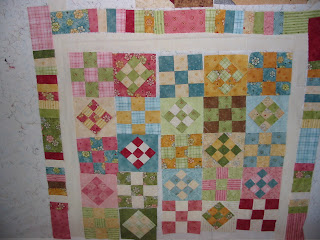 I really like the way my Tagalong came out. Not a very good picture. Seems I cut the bottom off. I finished this up on Saturday morning while waiting for them to bring my husband home from the hospital. He seems really good and talkative to his son. They had a very good visit. Then just decided it was time to go. He looked so peaceful and the Hospice ladies were very good. Took care of everything.
Later in  the week my daughter said she had found a cruise for us to go on. She had said last year after retuning from the one she went on to clebrate turning 50 and her divorce. That she would love  to take me on one for my 80 birthday which is coming up in July. So  we leave on July 25, on the Carnival Pride for 6 days to the Bahamas. The best BD present I could ever have. What a darling daughter she is.
Do hope I can bring myself to try this again soon. I do have other things to tell you.  So until the next time. Be safe and Thanks to all the wonderful comments I got about my  hubby's passing.
Posted by Unknown at 8:29 PM

Sounds like you're getting along pretty good. A cruise...you go girl!!

I glad to hear from you. You have been in my daily thoughts and prayers. How exciting to go on a cruise. I wish you lived closer so you could attend Kim's class tomorrow with Shirley and me, maybe some day! Take care dear friend, big hugs are sent your way!!

So good to hear from you! You have been in my thoughts and prayers. Your flowers are beautiful and so are your dear son and daughter. I'm so glad they could be with you. Blessings on your daughter for arranging a birthday cruise! Won't that be fun!
Your 2 quilts are beautiful, but I'll have to say that my favorite is the pinwheel one. Those are my colors and my style. :-)
I will continue to keep you in my prayers and thoughts. Love to read your posts when you feel like posting.

Your kids rock! You sound grounded without shaky knees. I love your quilting pieces. You'll have a year of firsts ahead, but you have so many that love you around. I can just picture you sippng on little umbrella drinks in a few months.....Smile.....

I want to send along my heartfelt condolences for your hubby's passing. So very hard to go through! I am glad for your son and daughter to spend time with you. That surely helps! Your quilts are so beautiful. I hope you can keep quilting with such talent you have. And a cruise....sounds lovely! May each day be a little easier and May God Bless!