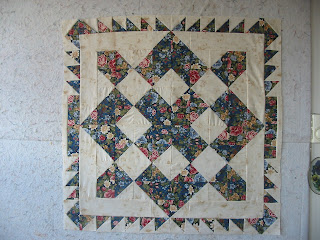 To start with I wanted to show you what I did with this little quilt. I found some more HST so wanted to finish this out with all four borders. It sort of looked unfinished the other way. Hope to get it quilted soon.
Hubby has been home again from 4 days in the hospital and now is really doing very good. Still needs to get rid of more fluid and this will always be a problem. So I don't get as much sewing time in. But I did get something finished that I wanted to show and tell about.

When I first got a Web TV back in the late 90s I was on a couple different groups and did a lot of swapping blocks and Round Robins. Don't hear much of those any more in the blogs.
The biggest and best group I was on was Larrisa's, She was in Texas I believe. Did several with her and can't remember the date but probably was 2000 early. One of the fabric company's came out with all of the States flowers in fabric. Lushest colors. So it was suggested that we do a swap using these fabrics. Each one would pick a state they wanted to do. They were to get a stamp of the state that would fit on a 6 inch square, with the things that the state represented. if possible. So figuered this would be fun and what a quilt I would have. Of course I choose Maryland with the Black-eyed Susan. I also ordered a set of Fat Quarters of all the prints to help complete the quilt. 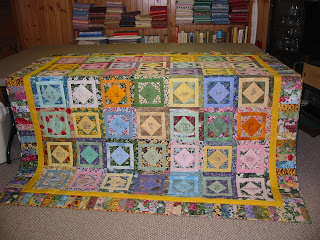 Finally, after at least 8 years I can say the quilt is done. It is a queen size so hard to photograph without a large bed to put it on so I made do with the tables in the basement. Can't get a full view but good enough probably if you click to enlarge.
I added to each block which is a color that goes well with the flower of each state and the center square was to be made into a square in square with the flower on the outside. I added a color as close to the center as I could get. Then added a strip of the flower fabric to two sides of each block. I thought it worked out pretty good. The only problem was I had one block to many . That is Hawaii and it is on the back. 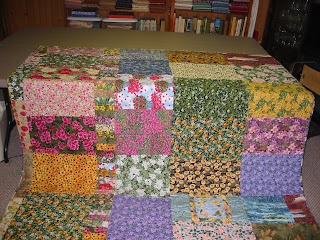 Then I used all the prints in the piano keys border. Then came the back. How to use up those Fat quarters? Yes, I pieced and pieced and ended up with a wild backing. Even used up the piano keys I had left over. 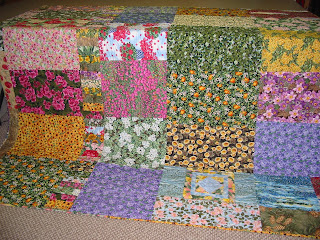 The Hawaii block is in the right corner. I have a closeup of  this here.

I have finished quilting it this morning with free motion around all the states figures in the middle of the blocks. Had done the binding first and used a variety of the prints for it. I still have some of those fat quarters left.

Now I'm wondering if there are any bloggers out there that were in this list all those years ago and have ever completed this quilt. Be interesing to see how someone else finished it off. Any one seen one?

This is my Spring Flowers to you.

it must feel absolutely wonderful to be finished with this beautiful quilt. What a remembrance. It is gorgeous...

I was in Larissa's group before you joined but I didn't do the states swap. I quit swapping as I got too many blocks w/o 1/4" seams that I couldn't use. (wasn't trading apples for apples!)

I'm glad you got your swap blocks done! I had heard about the swap but that was about when I quit. Good job!

Eileen, I do love the fabrics of your state quilt- the piano key border is fabulous.
Your other quilt turned out just lovely too.
I have some really nice fabrics laying on the floor to make into a convergence quilt.
I have been packing up my classroom at school as we are moving into the gym while they do a major renovation in my classroom. We will have 45 kindergarten students together in the gym. The gym will be a happening place for the next two months. I have been in my current classroom for the past 14 years so there is lots of things accumulated in our space. I also collect childrens' books- we have many shelves of them so I have spent the last couple of days just going through the shelves and culling them. This coming week is spring break so I will go to school to get some more things packed up. It will be easier when they come to move the things from the clsssroom.
It is nice to hear that George is feeling better.
We had snow at the beginning of the week but it a beautiful day today and the snow is melting.
Enjoy your weekend.
Regards,
Anna

That turned out really nice, and what a fun project to remember!

Thank you for this gift!!! I love flowers, and yours are especially lovely. Sorry about your husband...mine was retaining fluid too after surgery, and it is scary when they can't breath, isn't it!

Swapping is still alive and well, although I try to stay away because I am awful at finishing up the quilts once I get the swapped blocks back. Congrats on your finish!

Eileen, just wanted to say "thank you' for introducing me to quilt blogs. I saw your beautiful quilt on Judy Martins blog and visited your blog from there. I never realized there was a whole world of quilt blogs out there. Have you done any more of Judy's quilt patterns? Wishing you and your family a Happy Easter

Have so wanted to send you a comment but could never figure out how - until now. Can't believe you are tight with Kim at the other end of the country. I used to live in CA and shopped at Sacto are when visiting family.

I had the special privilege of visiting Boonsboro a few years ago in regard to my 40th HS reunion (Gaithersburg HS). My very best friend lives on the mountain. I almost fell over when I saw your blog that someone else even knew where it was much less blogged about it. Is the new Inn still the main attraction.

Love seeing your quilts and get inspiration. I too have had that "family care" situation a few years back and I identified with you immediately. Hope your blog responses inspire you as that is a tough place to be especially long-term.

Thank you for the spring flowers. That is indeed a beautiful quilt.
Hoping things are going well with your DH and with you, also.

Your quilt is breathtaking, front and back, the little quilt is very cute.
I hope your husband is still doing better on the whole.

you have not posted in a while. hope all is well in your neck of the woods. love seeing all your beautiful quilts and your flowers around the yard.
Dawn in MA