Gee, and I don't have anything green to show. Just couldn't think of another heading. Since it is March 17 what else. 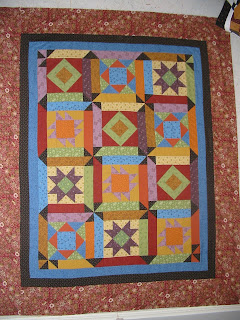 I have been a little slack on getting on with that mystery quilt I was making, but it is finished. Well the top is. See how those blocks went together. Really not like most Thimbleberries quilts with the colors but I really like it. Even my daughter liked it. In the picture it really shows the blues in it. If you click on it you can see the prints. They are all from the new Jelly Bean line. Even down to that black licorice. My favorite.

One of the reasons I havn't had time to blog for a few days, Hubby had to go back to the hospital on Sunday. His kidneys weren't working like they should and he was starting to retain fluid. Bad thing. So They have put him through a series of Dopamine IVs and has to be watched so has been in PCU . Is suppose to be moved up to another floor and get some PT. But he will be coming back home this time not to rehab. He has not lost his strengh so will be fine. 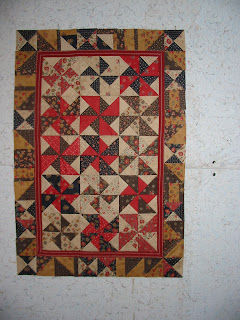 So with a free week I have been trying to get some things finished.
This is the second Schnibble's I've made with this pattern. It's the same as the blue and yellow one I made earlier. This was made with a plate of Moda Collection for a Cause. I liked the reds . 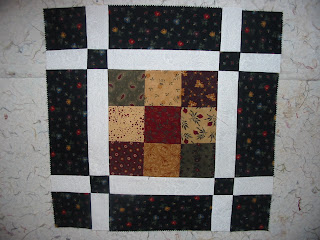 I have also joined up with the Jelly Roll challenge as you can see from the button on the side bar. Wanted to show you the first two blocks I have made.
This is the first one, 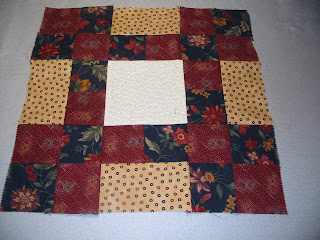 I had gotten a jelly roll of Kansas Troubles Butterflies and will be using that for all the blocks along with a lot of different  white on whites that I have collected. This is the second one. She lists a pattern on the 1st and 15th of each month.

You can still join in if you want . Just click on the icon and it will take you to her blog.


This week has been so beautiful. We had rain the first of the week and then warm. 60's finally. Today I got out and raked up a bunch of of loose limbs, leaves, acorns etc from the front yard. Then had to check on the perennial bed at the back. Lots of dead leaves so got the rake and clean it up so now all those flowers hiding under ground can come up and bloom. There are daffodills which will probably bloom later in the week and the lilies are coming up also. Oh and the leaves for the Naked Ladies are coming up also. Can't wait for Spring to really get here.

I finally finished quilting a quilt from way back. Want to get binding made and on before I show it. It was one of the first good swaps I was in at least over 10 years ago.  So stay tuned. Thanks for stopping by.
Posted by Unknown at 9:15 PM

I love your Thimbleberries Mystery! It's gorgeous!

I can hardly wait till I retire so I have more time to quilt!

The Schnibbles quilt turned out great with that collection. Of course, so are the rest of the blocks and quilts you shared!

Your quilt is just beautiful. I am doing the jelly roll blocks too and its fun to look around at all the blogs that are participating. I love your jelly roll choice.

Oh, it turned out wonderfully, don't you just love those Thimbleberry fabrics? I am sorry your dear husband is back in the hospital, hope he is well soon.

Great looking quilts as always. I don't know if I could pick a favorite. The blocks are great, too.
I hope that your hubby is continuing to improve.