I'm home and have been for almost a week but it has been a hectic week with doctor's appointments etc. Had a wonderful time. Flight was good although crowded both ways. I wouldn't have thought there would be so many people going to Dayton, Ohio from Baltimore. But it turned out it was a final leg for many coming from the west coast.

I have a number of pictures to show you but for some reason I can't get to them or don't know how. They aren't in the folder that they should be. Just haven't learned enough about this computer I guess.

I was very surprised with a quilt made for me by the members of our little Hollow group. Those pictures I will have to get to you another time, I hope. 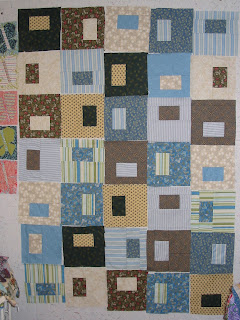 We arrived on Friday and after stopping at the members quilt shop we arrived at the Bergamo retreat grounds and many were already there. A whole weekend without TV, Internet or radio, A quite Catholic retreat, and good food.
The project for Friday night was this mystery quilt. I got the blocks done. This is them on my wall. They need to be squared up and sewn together in this formation. So more about that later. As I get it together. 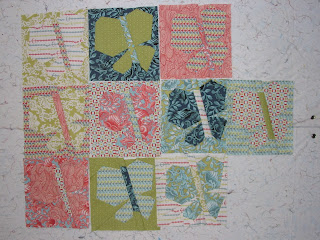 The big thing for Saturday was a Buggy Barn design. We could pick from many. Most did some Halloween things. I had a Layer Cake of Moda's Neptune they are 8 in. so had to modifier the pattern as it is 12 in. So this is the first 10 that I got finished once I got home. The rest are still on the 12 in. cutting board I had taken with me. Can;t get them messed up. I have a plan, sort of to set these together so will have to wait and see. 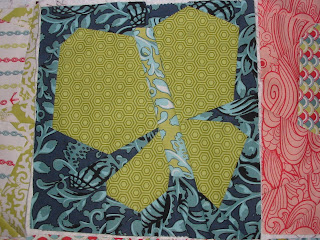 This is a closeup of the one I thought would show up the best. Lots of little pieces for this one.

When I got home close to 9 PM on Sunday night, I think my DD was really ready to get home. She had school the next day and had to get caught up with her sleep.
Hubby is doing fairly well. He broke a tooth off Thurs. night before I left and had just had him to the dentist. He needs 3 teeth pulled now. DD ended up taking him back on Friday as the broken tooth had a sharp point. It was an eye tooth and held a fairly new plate so that is gone. Don't know what might follow. He is set to have the 3 pulled this coming week.
At least we have plenty of Home Care coming several times a week so he is being well taken cared of. Me, I shall be glad when the Water Aerobics starts Sept. 9Th.

Hopefully I can figure out later how to get the pictures of the gift quilt out to show you. It was such a surprise.

Oh, One of the girls brought me a big bag of scraps. Since I like them so much. I ended up having to have a package mailed home so I could bring my quilt home in my suitcase.. Hope it won't be so long before my next post. Thanks for dropping by.
Posted by Unknown at 12:27 PM

Hi Eileen,
It sounds like you had a fabulous time and I think your friends were so smart to make you a quilt- It couldn't happen to a nicer person- I bet it is lovely and tells me how much that you are loved by your friends.
I hope hubby's teeth don't give him too much trouble- Glad to know to that you are having lots of home care in to help you too.
Hope that your back didn't bother you too much during your retreat.

I am looking forward to seeing your butterfly quilt - I love butterfly quilts- Is the pattern in one of the Buggy Barn books or is it a separate pattern?

So nice to see you on line again..
Warmest regards,
Anna

Well, your life is never dull. DH teeth are going to be requiring lots of dentist visits I bet. The quilt that was made for you must be very precious! You are precious to all who know you and it is wonderful they let you know how much you mean to them. The retreat sounded wonderful! The butterfly quilt sure is pretty.