It's been a long time

See I have been busy, Have finished this Gardener's Touch which I call " Weaving a Garden Path" 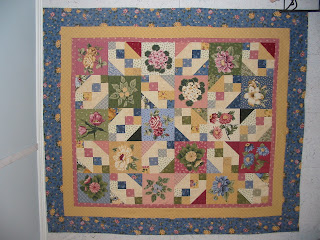 I really have been pretty busy taken care of my hubby. He has been in and out of the hospital a couple time. Once they put another stint in and the just the other day he went to the ER because his blood sugar had gotten so high. Hopefully we are getting that under control.

So in the meantime I have gotten this quilt top finished. It started last year with Kim sending me the blocks of flowers that she didn't want. Then when I was in Kansas City a year ago for a weekend retreat with my friends one of the things I was looking for in the shops they took us to were pieces of this collection. It is Thinbleberries of course Called Gardener's touch and came with these printed flowers. So this is my version.

I also have been trying to get a quilt machine quilted but my time to go to the basement where it is , is very limited. Hopefully I'll have that to show pretty soon. 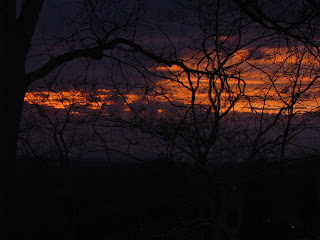 About the only other thing I take pictures of is these wonderful sunsets we have . This was just a couple weeks ago. Not quite as good at the one at the top of my blog. But still good I think.

I have been trying to get a blog written about the open house of the Inn but I can't seem to get the pictures right so until I do you will have to wait for that. I just have to say it is spectacular. You can sure see that Nora has traveled the world as she made her Inn as good as any you will visit. More about it later.

Sorry I have been so long in between blogs. Even have one of my faithfuls write to see if something was wrong. Guess I better get something written every week. Really haven't had time to read many blogs either. Thanks for dropping by. More a little later this week.
Posted by Unknown at 7:04 PM

Glad to hear from you! I was also thinking of writing to see if you and hubby were ok. Minniestitches

I love your quilt and I may have to try a version myself. I hope that your husband does better and they get his blood sugar under control. Your sunset is beautiful, and I'll look forward to your post about the inn.

It's good to find your post today! I was beginning to wonder if you all were ok. Sounds like you have had your hands full.
Your quilt is so pretty. I have never seen that setting before. I like it! It does make a great garden path.
Did you get much snow/ice in this last storm? Your sunsets are great!

Oh, I have missed your blogging. I figured you had your hands full and by the sound of your blog your sure did. I love your quilt. Simply beautiful. Good for you to squeeze out the time for quilting. Life is full here. The spring birds are here. Robins, and lots of gold finches. We go through so much neyger spelling? (the black thistle), black sunflower and safflower seeds. I am glad you are OK and hanging in there.

I love your gardening quilt!
I hope hubby is getting better.

Hi Eileen,
Like some others, I was beginning to worry about you and yours, so it was nice to see your posting.
I knew you have lots of friends out here in Blogland, thinking of you and hopeing that you both were ok-
Sorry to hear about hubby's visit to the hospital- hope he was not too uncomfortable.
I enjoyed looking at the photos of Nora Robert's mansion.
As always, your quilt is lovely- the flowers are so pretty.
Regards,
Anna