That Valentine That Lasts Forever

This is what came in the mail yesterday from our daughter. What a lovely way to start off the 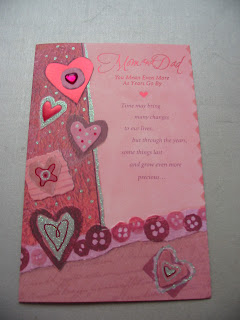 Valentine weekend. She is the best. Getting her life back in order and having a great time watching over the girls at collage and the younger Freshman in High School.

Then yesterday evening a friend was leaving and said did you know you had a package out here? Nope lets bring it in. When I saw the box I knew my Hubby had done what he said he was going to do. He'd asked for his credit card. Seen another advertisement on TV. 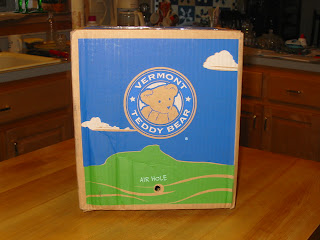 He'd asked me if I wanted a bear. I hadn't paid much attention to him or the ad. They sure get to him through. This is the neatest box. See the hole. It says "air hole". Guess all bears need air. If you have seen these ads these bears are really worth it. All American made in Vermont. They have made full use of the packaging. 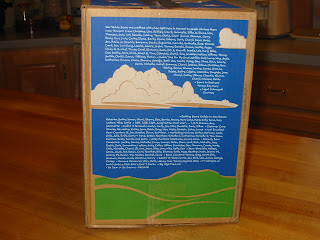 This is the back and I think they has every one who works there, name on here. One the side it says " Someone who cares about you has sent you a bear-gram from Vermont. You can do the same by visiting us on the web at VermontTeddyBear.com
The bottom say If you can read this either you're upside down or the box is and the bear is getting a headache. He finally said to open it.And this is what I saw. A BANDIT bearing candy 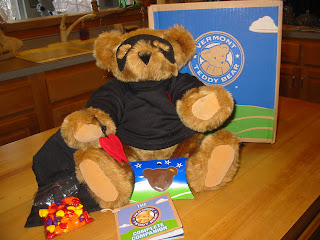 I asked why he got a bandit? Because he liked it so is this for him or me or he said if I didn't like it he'd give it to our daughter. No way is it leaving this house. He will have a big time with it. Now when something is missing , the Bandit will have taken it instead of the squirrels.
He has this little package of a bear embossed on a piece of chocolate. Then in his bag which has the two hearts at the end of the string are some candy hearts. All made in Vermont.
He is so soft and they say you can Wash them in the washer but they like to hang dry by their ears. 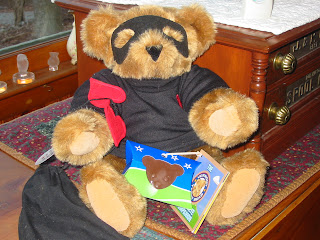 This I think will be his resting place, on the end of the drop leaf table in front of the window watching you know who. Hubby says he wakes him up when he falls asleep. Nothing like being in your second childhood.
What did you get from your special one for Valentines Day.?

the bandit is too cute. the card from your daughter, priceless. Happy Valentines day.

Oh that is the cutest!!

My hubby had a pink cyclamen plant for me (I LOVE them!!) and a good handful of cash for my trip to the quilt shop yesterday. :)

Happy V Day to you two!

I love your bear- he is very handsome... What a nice thing to get... There is something wonderful about teddy bears.
I hope all is well with you..
Hugs,
Anna

your bandit bear is so adorable from your little rascal.
glad you had a lovely Valentines Day

How nice! I am so glad for you...cute little bandito!!

I have been to that Bear Factory in Vermont and it is wonderful. I had a terrible time choosing which bear to take home. I now have 4 of their bears. The boxes are adorable.