The Rest of the Story

Have you ever had an MRI? Thank goodness it was in an open one. Never had to do this before but when My legs kept getting numb and tinkly and my hip was hurting some times and then my back. Even after Hubby was in the hospital and I got some good nights sleep, I just had to go to the Doctor and insist that something had to be done. I could sit and quilt in my lounge chair for a couple hours with no pain but get up and hardly able to stand let alone try to walk standing up straight. He punched and prodded my bones in my back and hip and found some very sore places so figured I should have an MRI.

What a place. 8 AM and by my self. In a part of the city I had not been to. A new industrial area. Nice new building with several doctors of the Spine and nervous system and even a Chiropractor. She asked if I had been to one. So I guess they approve for some things. Oh, there is a Physical Therapist also. So they have it all.

Was surprised I didn't have to disrobe only take off my /bra , No metal.Oh and my watch. You have to step up on this big table with this huge thing over you. But she put a pillow under my head and something to rest my legs on with them bent up, so was really fairly comfortable. Good thing since she said it would take about 35 minuets and it would be noisy. I asked for some music which you really couldn't hear. But helped when it was a little quiet.

That was it. They gave me a CD which I thought I could put in the computer and see. But then thought better of it. Wouldn't know what I was looking at anyway. The next day I stopped in the doctors office to see if they wanted the CD and she had just gotten the report from them. The Doctor wanted me to see a specialists, Yep right out there at this same office. I was to call and get an appointment. She also said when I asked what it said that I had a bulging disk and Arthritis and some other stuff I didn't recognise. That disk thing was bad enough.

So I now have to wait until April 8 to find out what is wrong and Hubby wants to come home if he can at the end of the week. He is doing good but still hasn't started to walk at all. At least they have his sugar at a good level.

Thought I would show you the last thing I finally finished. 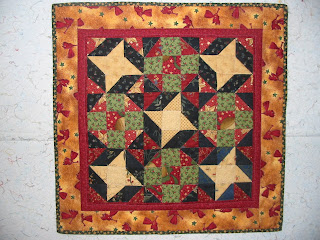 Marcie's Star all finished and quilted. Just in time for next Christmas. I do think I will put it on the spool cabinet in the living room for awhile.

Have been finishing up a few other things. Like making the label for the back of the ChexMix quilt.
I also have a Sunbonnet Sue quilt that a friend asked me to hand quilt for her and I have it all marked except for the border. Then to get it basted and ready to start as soon as I finish quilting my Christmas quilt. Pictures for that one will follow later.

That's about all for now. Had another nice weekend with my daughter and grandson. She spent a couple times yesterday and then at noon today with her Dad. So thankful she is close enough to come and help a bit. Thanks for all lthe comments we appreciate it.
Posted by Unknown at 9:25 PM

Eileen, I have had several MRI's - good thing they don't hurt! Sounds like you have what I do - bursitis - sitting is great, but then when you stand up and walk - yikes! The good news is there seems to be something they can do for all of these things nowadays! I'm so sorry you had to go to an unfamiliar place all by yourself, but you made it!
Sounds lik your hubby is doing better, too. And I love Marcie's Christmas quilt!
Cheers!

I've had 2 MRIs I think. My almost 8 y.o. little boy has to have one on his head tomorrow and I'm nervous for him. They are doing it under anesthesia, thankfully.

Hey,
Just getting back into my blog friends after family left. I have been missing you. I have lots of reading to catch up on - will be in touch.