Open House at the INN

-This is the day I have been waiting for. Nora Roberts has graciously opened the INN BOONSBORO to all the citizens of the town that wanted a peek inside. We've watched for well over a year the tragedy of the fire and the the rebuilding, better than it had ever been.

My daughter was home for the weekend so we went down early expecting a crowd early. Not. We were the second ones there. This is the entrance to the patio area in the back. 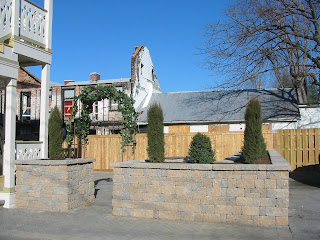 The entrance for guests is just to the left of this. Going into the newer part of the building which is all brick. I was surprised how small the room seemed to be. But a fireplace was on the back wall with a fire going. Well, gas logs but good heat. Two big inviting chairs and a table with flowers which the Inn keeper said was their check-in area. You could sit , have a glass of wine and enjoy. 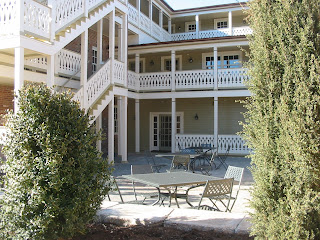 This is the view from the back of the patio looking into the Inn; In another picture I will show what is on the other side of that large door in the center. 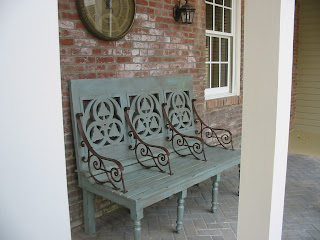 This is a very inviting bench which sits under all those steps. I imagine come summer this patio will be filled with flowers. She has a local florist doing all the flowers in every room, 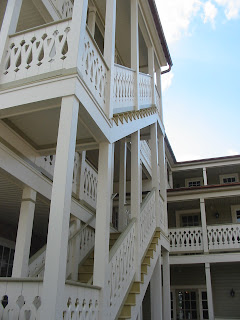 I just think these stairs look great. Something out of one of her novels. When we finished the tour on the upper floor we came down those stairs. 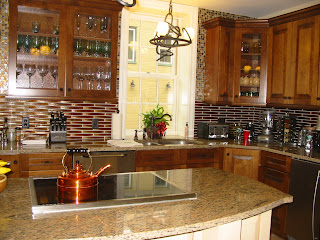 Leaving the entrance and along the hall was the kitchen. Wouldn't you love one like this? I couldn't get it all but it was in a U shape. She does the breakfasts here and serves them down the hall in the next room. It was the front room overlooking the outside porch at the front. About 4 small round tables with chairs. It was fairly dark so didn't think I could get a good picture. besides there were people in the way. 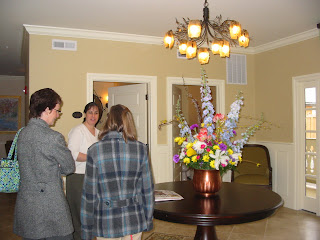 This was the next or middle room. Looks to the front and to the back patio. Also the two doors are the public bathrooms and what a surprise. I think the bathrooms were the hit of the day. There was an elderly couple with us and the man walked into it and got close to the toilet and the lid come up. It also flushes and is a bidet. All of them are like this. Much to my disgust when I took this picture the little red light came on saying batteries gone. What a time and I could have taken a whole lot more pictures.
Will just have to imagine with my telling you. All the bathrooms had very different sinks, design. Each according to the room. Most seemed to be molded glass of different colors. The one room for wheelchair accessibility is on the first floor in the front. Has two beds and only a shower that you could take your chair in if you wanted. Most of the showers had glass walls, Not very private but--
I so wanted to show the Library as I found out that my cabinet maker had made all the Library and the trims in the whole Inn. It had one wall solid with shelves with a fireplace in the center. Of course many of Nora's books but also other authors. That you can sit on the soft sofa and read or take to your room. Also a desk at the window with a computer and an Old fashioned black dial telephone that works. Of course there are paintings all over the walls. Some on loan and for sale.
There are three rooms on the second floor besides the Library. The stairway is something else. Ever see a iron stair way railings. Goes up the three floors. They were done by a local man and really something several twisted posts together.
The third floor has the Penthouse with a sitting room and the other room at the end of the building has the only Jacuzzi tub, All the bathroom floors are heated tile and the towel racks are also heated. Talk about luxury, Just made for a romantic night out. She says that most of the rooms are booked by men. Guess they don't mind spending that kind of money. But what a night that would be.
The Innkeeper has an apartment on the third floor also. Stop by sometime. Tell you hubby you want a hot night out. in a small rural town with lots of sights to see. Only about 5 miles to the Antietam Battlefield. More information on the website. www.Innboonsboro.com

This looks lovely! I'll have to tell my hubby. ;)

How fun your dd was home and got to see the opening with you.

Glad you are back to blogging. Tell him to stay well from me. ;)

Wow, it all sounds so neat. She is a favorite author at our home.I am glad you got to go!