This will be the INN place for Romantics 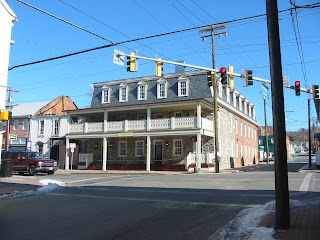 Just after I made the last blog post there was a front page article about the INN BoonsBoro. Some information that I had wanted to give before but the paper got thrown away. It says that Nora Roberts granddaughter is going to test out one of the rooms, With her parents of course. She is 6 years old and wants to stay in the Princess Pride room as she is very fond of princesses.

The 8 guest rooms include the penthouse and 7 themed rooms. Named for literary couples. They include Nick and Nora Charles of the Thin Man, Jane and Rochester from Jane Eyre, Elizabeth and Darcy from Pride and Prejudice, Marguerite and Percy from the Scarlet Pimpernel,
Titania and Oberon from A Midsummer Night's Dream, Westley and Buttercup from the Princess Bride, and Roberts own characters, Eve and Roarke from her "In Death" novels written under J. D. Robb.

The Inn built in the late 1700's was previously know as the Boone Hotel, and once the Eagle Hotel . Information can be found on their web site www.innboonsboro.com.

It has been so much fun watching the Restoration of this great landmark in the center of this little town. I've lived here for 40 years now and for years nothing new was added. We didn't have new developments until the last ten years when people started to come over the mountain and found that land and property was cheaper and it was just an hour away from government offices. But guess this is the way it is all over the country. Lets just hope that with this slight depression that things don't get too bad. We have a wonder community.

Now this has nothing to do with sewing. Well, I haven't been sewing much lately either but have my hubby home and feeling much better and my daughter was up for the weekend and she stayed in the living room with her Dad and I went to bed and closed the door and had two wonderful uninterrupted nights of sleep. What a wonderful daughter. Thanks You so much Rolinda. She's a jewel. Then I have to mention our sort of adopted daughter Roben, great friend who drove me to Baltimore for two days and waited all day Friday for them to get him ready to come home. She loves to come and talk to my Hubby. She misses her Father. Thanks Roben.
Course she did enjoy driving my new car.
Now back to the routine of Doctor's visits. This week he has to get the final visit with the eye doctor about his cataract surgery. I have to get to my Chiropractor which I missed on Friday. So always something. no more pictures. Just Have a good week. Thanks for stopping by.
Posted by Unknown at 6:16 PM

Nora Roberts is up there on my all time favorite author list. I would love to stay in her Eve and Roarke room!!!
Glad you got some sleep. :)
dawn

Yes, daughters are wonderful.
"Almost" daughters, too. I'm glad you got some sleep and had some help with the driving.
I've enjoyed being updated on the progress of the Inn. It's really looking sharp.
Take care!

Eileen, I’m glad to hear that your husband is back home and feeling better.

It is exciting that the Inn BoonsBoro is opening in just another week, ready to start another chapter in its long histroy. I’ve enjoyed the posts you written about it during its restoration.

Look at you, a final or almost report on the inn, with pictures and an embedded link. that new pc is working out well for you.