A Side Trip to Oregon

Last Monday evening I flew to Medford, Oregon where my oldest brother picked me up and we spent the night in a motel. It's over an hour to Tiller over winding narrow roads. Not something to do at 10 PM. My flight was delayed by an hour so really made it late. We went to bed. Since he is going to be 90 the 18th of this month. 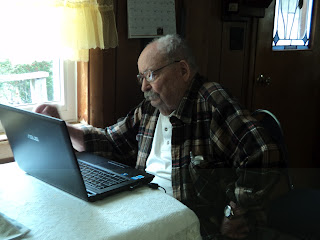 Here he is working on my new laptop. He wanted to get the Yahoo messenger uploaded right. 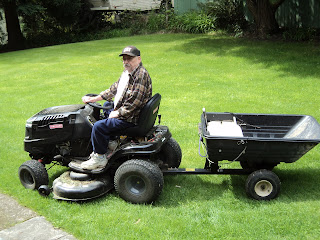 He gets around the property on this. Took me for a ride around the house and up on the mountain and past the fruit trees in bloom. He owns to the top of the mountain. See the tall trees. 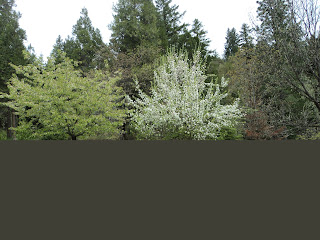 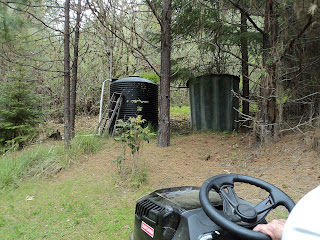 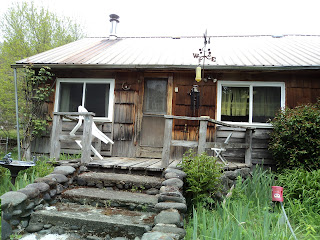 This is the front of the house. They have been there for over 30 years when he retired from the Navy. 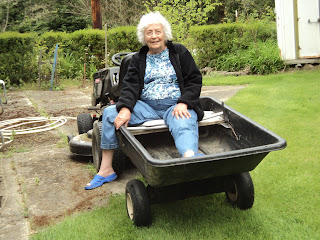 Yes this is me as he took me up the hill and back. Was a nice ride. Past where  they had a huge pine which was struck by lightening and fell across the bottom drive. There are logs still laying around waiting for a saw mill to come and cut them up. He is waiting for his son to come and live with them. But he has to recover from a motorcycle accident.
I was there through Thurs,. and it was another waiting game. It was rainy and foggy and planes were  backed up going to San Fransisco and mine was late coming in from Denver so again late home. Fortunately Sara my granddaughter was down in Denver getting her car tended to so she came to pick me up so my son could go home and eat and rest after a long day working.
a
Was so glad I went to see them. It had been at least 20 years since I saw my sister-in-law  and about 8 years since my brother had visited me.

Am having a nice restful time here at my sons. Had about 6 inches of snow on Sunday but today the sun was out bright and it has almost disappeared.They are calling for more this weekend. Springtime in the Rockies.

I go home next Tuesday and will be happy to see Penny. She is being well taken care of by my neighbor. I have been quilting on my log cabin. Want to get it finished as it will look nice on my Sons bed now with his newly remolded home.

What a fabulous little slice of heaven your brother has up there on the mountain. Someday I want to have a place like that. Someplace where you can live off the grid.

I'm glad you are having such good visits! Those brothers sure look a lot alike. I had to do a double take for the first one.

I have such fond memories of visiting there. M & I had a delightful afternoon of rafting down the river. Such fun!!

that was really a nice view and nice place...
Get Best Info for Orgone Information