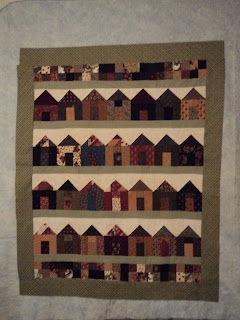 The first Schnibble's that Sinta of the Pink Pinchusion said was this Houes by Carrie of course. So I put aside my work on the mystery to get this done this weekend. Looks like I went overboard on counting making the houses so ended up with three  rows instead of two but we can always put our own idea in the pattern. I didn't like the red borders as it made it too dark so figured the houses needed some grass and this Thimbleberries fabric worked good. The border is also Thimbleberries. You will have to click on it to really see the colors. I call this Santa Cruz, 1950. From all the different bright colors on the houses. I used two different charm packs and some extras I had laying around. 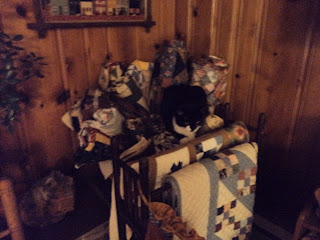 Then I have to show you Penny's new sleeping olace. She is on top of the basket that I have quilt tops rolled up in. It's on the hearth and therefore up a little higher. She got in there at Christmas when DD was here to be able to watch us all. When she isn't in the chair that is where she is. Click to enlarge.

Orca Bay - This was my  first design when fooling around with the blocks. Couldn't figure out what she was going to do with the small blue strings. 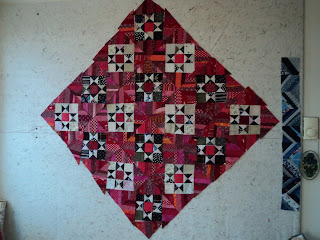 Then  she came out with her design. I have the first two rows finished and the rest put on the board but not all the Ohio Stars done or all the red strings and that set all squared up so-----

Picture  disapeared.
This shows what I have put up so far. I didn't get a picture of the board as it is now as I put another tablecloth on top to have a board to put the houses up on. 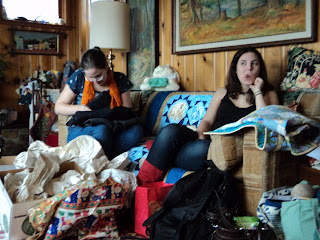 Firgured  I   ought to show a little about Christmas as it has been so long since I posted. Such a mess two girls can make. Anglea was getting into her last box from her Mother and what a surprise. She got a wet suitl She wanted one when she was still in school as she had some diving classes and loved it. Just hope now she gets an internship on the Bay so she can get some more training.
We were minus one as Dan decided he would rather go to Florida with his friends than to Mamaws house for Christmas. So it goes with almost 18 year olds. He graduates in May.