I had a picture here of Penny and while I was writing last night all of a sudden it and some of the letters left. So I left to come back today to see if the picture might be here. Nope , So just imagine a picture of a black and while cat sitting on a chair. 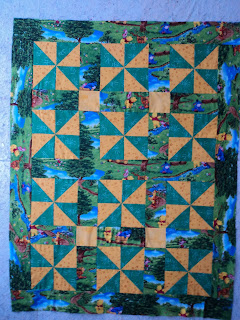 A couple weeks ago I went to a Kids Quilt meeting to sew and get to know some of the other women. It was fun and this quilt with the pinwheels is the one she was doing that day. Since this group all started by some women wanting to learn to sew so the lady that started it said she would teach them , IF they made some quilts for the kids. So each month she designs a quilt and cuts all the fabrics and she then teaches them the new things for this pattern. So the Pinwheel was the first for them. I had a little trouble after trying to finish it. Her border and the blue that is the sashing wasn't enough. I finally decided to put the yellow cornerstones in the middle and then the blue worked. That fabric has Disney Characters.


Well another picture left. I have never had this happen before on here but it was a picture of another quilt made with bricks.  Have two  of them finished and have decided to let her quilt them when I found out how she does it on her long arm. Loading three at the same time and quilting across them all at the same time. 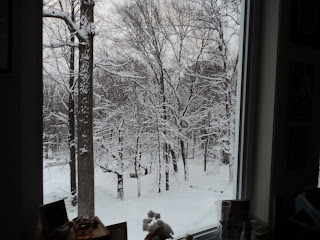 Now I had to show you our last snow storm. This wasn't near as bad as the mid-west or north but the trees were loaded with snow. No that is not Penny  looking out the window. I took this out one of my porch windows and that's just some of the stuff I have on the window sill.

I have some other quilts that are finished to show you but since I can only load 4 at a time I will put them on the next blog. Hopefully not very long. Thanks for stopping.
Posted by Unknown at 8:22 PM

How fun that you can get them quilted on the longarm...wonderful quilts!