Meet Penny as I caught her walking in the kitchen. 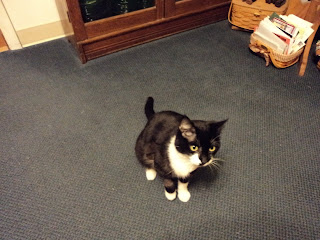 This one below was the first and how shy she was sneaking around the corner of the hallway looking at me in the dining area.

She has gotten so she will sneak in the living room and today even curled up and made herself at home on the couch. So since she has only been here for a week .,This is good. Especially since we don't know what sort of life she had before I got her. 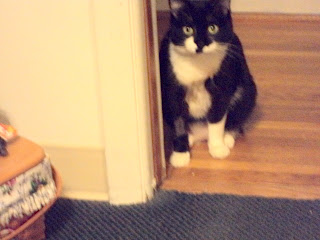 I even went off and left her overnight Sunday. Went to Annapolis to the retreat where I used to go for Quilting. But this was for a wonderful night for a Madrigal dinner and music presented by the Voices of Praise musical group of 40 from my daughters church. This is the group that both of my granddaughters were in. Was a great night with good company. I spent the night at my daughters then and came home this morning. 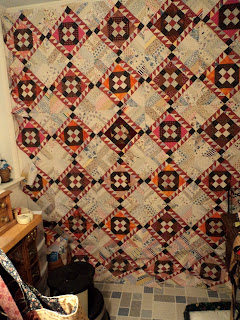 This is what I have done on Bonnie Hunter's Mystery that she finally finished up for us. I have the blocks all sewn in the diagonal strips but decided to work on my next months mini this time is a Schnibble's again, Mon Ami. or like I have been telling Kim, Bon Ami. I have over half of the blocks made. It needs to be done by the end of the month to get in on the quilt show. 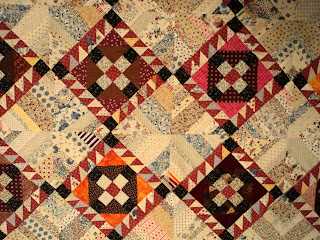 This is a closeup. I have used similar colors that Bonnie did but used for those bright pieces, anything from bright orange, hand dyes to reds and marrons and anything in-between. The strip pieced blocks make an unusual alternate block. It gets a red, like the HST for a small inner border and then an unusual pieced outer boarder,

We are expecting more snow tomorrow so maybe I will be in and get more sewing done. Thanks for stopping by and meeting my Penny.

Penny is just gorgeous Eileen, I know you're both going to be very happy together! And you've done so much work on Bonnie's Mystery - I am so impressed, and it looks wonderful!
*hugs*
Tazzie
:-)

What a sweet little kitty! And my how busy you have been with your mystery quilt nearly done. I am just now piecing together the blocks. After so many weeks working on parts, it is pure pleasure to put those parts together. :-)

Oh! Penny is adorable! i have a fondness for tuxedo kitties..even tho I am truly a dog person. lolol your mystery quilt is gorgeous. Makes me wish that I had joined in...still working on a memory/t-shirt quilt.

Your kitty is very sweet and your Roll Roll Cotton Boll is wonderful. You really do get so much quilting done ! I love your color choices- another beauty Eileen.
We have had a foot of snow over the weekend and they are predicting more is on the way. I had a very small class of children yesterday because the bus could not get into the side streets to pick up our students.
Stay warm and Happy quilting,
Warmest regards,
Anna

Those gorgeous big eyes looking at you - she's a sweetie. Love the quilt as well. I wasn't sure looking at the blocks but when you have it all up, it's great. - Melanie

Penny is very lucky to have found you. Cats do everything at their pace so patience is what is needed. I adopted an 8 1/2 year old cat given up at the animal shelter in LA and it has been four months now, he was good with just me now we moved again but he is very loving. Penny will be too. Congratulations. What a cutie.

Penny is adorable. We've had our adopted Ragdoll for 4 months, and we're all learning each others' personalities. Just takes patience. She'll soon be helping you quilt! Love the scrappy quilt.

Penny is a cutie, soon she will up on the sewing machine "helping" you quilt! Love your quilt---you have done a great job so far!!

Your new kitty is very cute and your RRCB is gorgeous. I am way behind on mine but hope to get back to it in the near future.

Great job on your RRCB. My friend Michelle did it too and hers turned out wonderful!!
Peggy in NJ

Your Cotton Boll (or Boil ;) quilt is wonderful. The thought of all those pieces (and my lack of neutrals) makes it overwhelming. It is great that you were able to accomplish it!