This is the quilt I have been hand quilting, it seems like forever but checking back 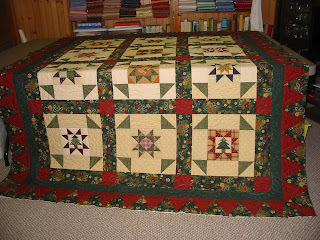 I must have started it in September as that's when I finished the Feed Sack quilt. I have this laying on and over the tables in the basement as I can get a good shot of it.. These blocks were made probably in 05 when the group had a monthly star swap. We would pick the star block and then if you wanted to make some you sent them in and they were swapped out. I love these trees. Used them also in the small runner I made for the kitchen over the washer-dryer for Christmas - winter. 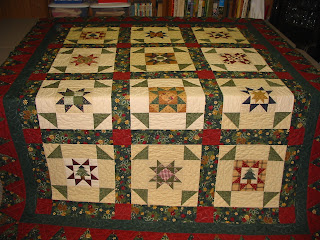 The setting I must have seen someplace. It's Called the Christmas quilt not only because it is red and green but the green sashing fabric is part of the Christmas collection for a couple years ago. It has holly leaves and flowers. 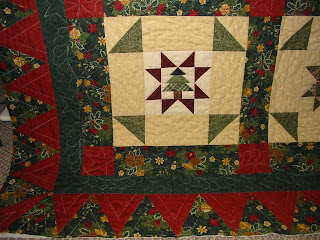 This is a closeup of the corner block and you can see the quilting. I drew holly leaves and berries in the beige outside part of the block. Then the border is a template I bought in Mn. with wavy feathers and stars. Didn't really know what to quilt in the triangle outside border so just did in the ditch and an inch on either side to fill in. I have used the red for the binding and will get that sewed on when I get tired of quilting on the Sunbonnet quilt.

Did want to show how I've quilted the setting blocks. I think it will show up. Kathy this is mainly for you. The next time I show a block it will be a set of 4. 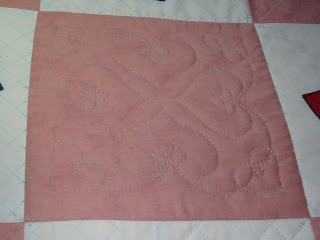 I have three more blocks done now and just starting on the fourth a Sunbonnet. They are fun. Helps that I have the time now to quilt in the living room while watching the Orioles play. Hubby doesn't like baseball. The living room is his TV.
He's coming along slowly. Will get his pacemaker replaced on Monday. It's only been in for 14 years and has surprised most of the doctor's. No bit deal It is just under the skin. They hook it to the same leaders that go to the heart.
Then Friday I get my shot in my back, Sure hope it helps. I've really been taking it pretty easy, that's why so much quilting is getting done. They are saying that Hubby may Thanks for stopping by.

Love your hand quilting! Enjoy reading your blog! Thanks for sharing your pictures, you're a great inspiration!

Eileen - I LOVE your Christmas quilt! Those little trees inside the stars are so cute! You are an amazing hand quilter! Glad to hear your DH is getting better and I know for sure the shot will help you a lot!
Cheers!

YOur Christmas quilt is coming along beautifully. I'm so glad you are taking it easy, taking good care of yourself. I'll be looking forward to hearing that the shot has made a big difference for you.---And that hubby's pacemaker change out has improved things for him, as well.

Eileen, those little Christmas trees are so cute. Are they paper-pieced? It does my heart good to hear that you can sit and quilt and watch YOUR tv at your leisure. Enjoy, and I'm praying for your back to get better with the shots. Hugs, CAthy Trumble

What a beautiful quilt and beautiful hand quilting too. You are an inspiration!