This is what we woke to this morning. Something like this as this was taken last year. 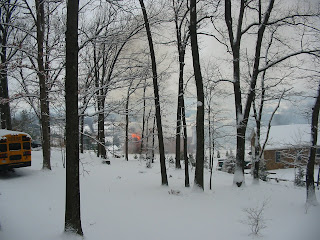 Figured I could use an old snow picture as a tease to start to show you a little about the Snowflake blocks I have started to work on. Really They are called "Chance of Flurries" and another of those puzzle type patterns by Pieces of the Heart, This starts with 8 fat quarters of each blue and beige. Then you cut them according to the pattern like this: 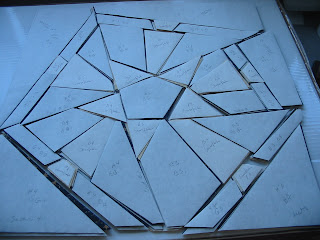 Here I have both of them stacked on a large box so I can move them if need be and pick out each piece as I need it. You switched certain pieces so that when you sewed each block you have the design. It is made with 5 sections and then the sections sewn together. 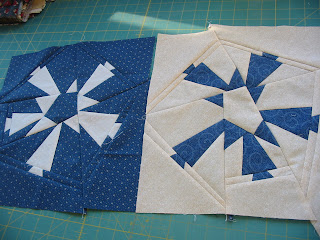 Here are the first two I have made. Have one more blue one but have been very busy the last week with Hubby

He had his cataract surgery Monday morning and so far everything is fine. He had an appointment to see the surgeon on Tuesday morning to check to see what he could see. Has to have drops put in 4 times a day. 3 different one. That takes a bit of time since they have to be 5 minuets apart.As of this afternoon he could see the TV and read on it without his glasses. Next comes a couple more visits to the doctor and then getting his new glasses so both eyes will look the same.
We've been pretty lucky weather wise compared to a whole lot of the mid-west and North. The past couple days have been very cold though , in the teens. Got up to 25 today with a little snow. No school either.
I've also been working on some swap blocks for the Hollow so that is a little sewing I've done. Also spent an afternoon in the basement quilting on that quilt that has been patiently waiting to get finished. That's about it. Until another time. Thanks for stopping and leaving a comment.

wow looks like a lot of work, but looks nice. thanks for sharing, have a great eve.

I love your snowflakes, both the ones you made and the ton you were given! I am so glad your husband's cataract surgery is over and his vision is improved, and hopefully the drops will get less with time.

Great snow picture, Eileen....is there something burning in the picture - lots of flames!
I love your snowflakes - so crisp and clean! Glad to hear your hubby is well on his way to better sight! Stay Warm!
Cheers!

You are getting cold weather, hey! Nice shot from last years. Nice lead in to your Snowflakes. All I can say is wow!. Beautiful work!

I am happy that your DH has had a successful surgery. My mother has had both eyes done and I have travelled back to the old country each time to drive, administer drops and tend to her every need.... How wonderful that you can do the things you do AND manage to make a few stunning blocks in between all that had/have to do for your DH.

I hope you have a restful weekend.

I like those snowflake blocks. They look really cool. And the colors are perfect for snowflakes!

What a cool snowflake block!! I've never seen anything like it - its going to make a cool wintery quilt!