This is the way it looks today. A front view from across the street. She has done a wonderful job trying to be as much like the original as possible. For those who have not been following the progress of this old Hotel. It was in bad condition when Nora Roberts bought it and while restoring it last winter there was a terrible fire. You can see those pictures in previous posts. 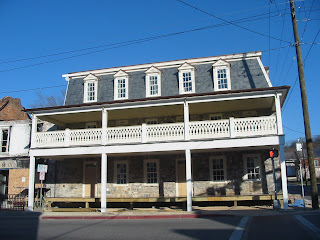 Can you see the lower porch there in the front on the ground level? That is new, hasn't been a porch there for the last 50 years that I know of. There were stone steps that went up to the front door. I imagine that they have an old picture that shows a porch like that back when the road was dirt and of course no stop light. 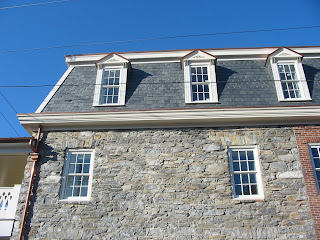 This is a view of the side and I wanted to try and get the dormers. They have fancy work over the windows and The roof isn't the only thing that is copper. So are the gutters and drain pipes coming down the side of the building. This stone is the original building. The brick on back farther was added sometime later.
This is the very back and notice all the fancy stairs and railing. 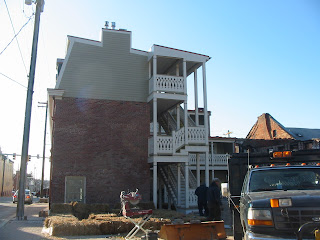 The straw on the ground. I talked to the man that was standing there cutting brick for the people that were laying brick walks and the garden area in the back. They had it covered with plastic and straw on top to try and keep it from freezing before they could get it finished. I commented about the fancy railings all over it and he said that when they did the first renovation they found one of the original railing so she had it duplicated. Really makes for a terrific looking building. 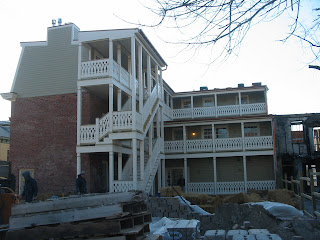 Here's a better view of it. There was a big wall like there in the fore ground . It's a planter. Course will look a whole lot better when they get the burned out house next door restored also. 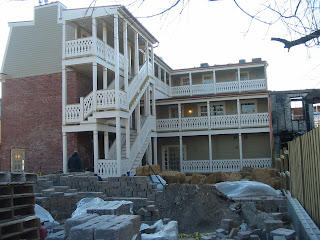 See how the stairs wind around going up to each floor. 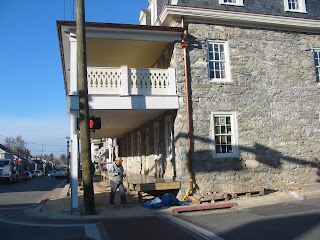 Going on back to the front this is another view of the little porch. Have no idea what kind of steps they are going to put there.
There was an article in the paper a few days ago that said she had an opening date of Feb.17. Guests could Begin booking reservations on line on Sat. The date of her first book signing is Feb 21. Several guest, mostly Roberts fans have booked online at www.innboonsboro.com. Rates range from $220 to #300 a night. There is 8 rooms. Seven are themed rooms after literary couples. The 8th is a penthouse. The Inn-keeper will also live at the Inn once her apartment is finished. I know she has used many local people for this work. The cabinetmaker that did my home did some of the work. They have had the furniture bought and in storage at the local furniture store for over a year. 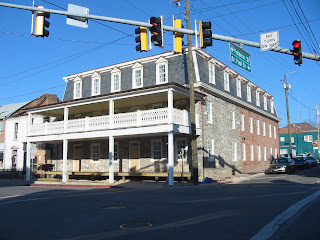 Here is another front view from the other side of the street which shows the side as well. She bought that burned out home next to the Inn and will restore it after the Hotel in complete. Someone said into a honeymoon suite
I will have a final on this when it is complete with sign on the front. Hope you enjoyed visiting our little town and this historic building. This road is the original Route 40 going from San Fransisco to Baltimore. Now is know as Alt. 40. Hope you can visit one day.

Hey, your blog is looking good! Thinking of you.

That is really something - all the work they have done! I love the railings!!

Fabulous update. That is really going to be something when it is done. I am so glad Ms. Roberts did not pull back when the economy went south.

I've so enjoyed the progress you've shown us on the hotel, Eileen! It's really coming along!
Cheers!