Heres my completed Charming Friends quilt and if you click on it you might be able to see some free motion quilting I did in the outside setting triangles. I am much better in stiching in the ditch or triangles. 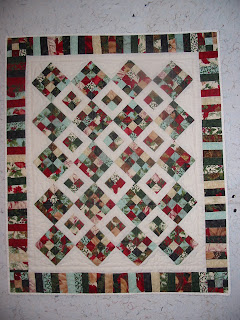 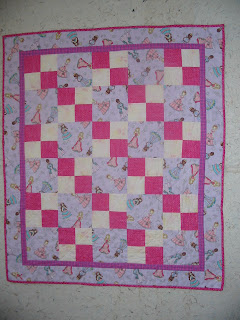 This is the first of the Kids quilts that I have made. I got the kit at the quilt shop. This is the project that is sponsered by the Downey Corp. They have woven labels for us to sign and put on the back. The lady in charge here in this area usually quilts them but since I had some large scraps of batting and found a good backing I decided to go ahead and finish it off. 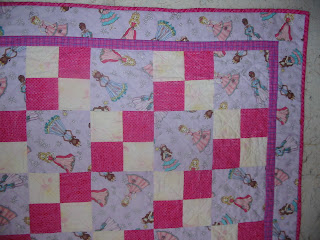 Here you can see a closeup of how I quilted it. Such cute fabric. 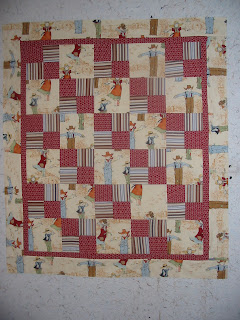 This is the second one that I made up of some material I had. Figured it a good way to use up some of this stash. I have it ready to get sandwiched and quilted. Once that is done it takes no time at all to quilt them. Doing the binding takes the longest. From what I understand these quilts are given to some of the local childrens hospitals. There are a couple in the DC area.

Now I have no more pictures. Didn't think to take any down at my daughters home. I went down in the early afternoon on the 4th. It is in Southern Maryland not too far from the Chesapeake Bay. She's living with another lady that works for the government and has this spacious home right on the edge of woods with a stream below. What a wonderful outside screened in porch. They have 4 cats and when M. is gone on business which she is often is for days at a time. DD tends to the cats and the house and tries to pick up after her. They really make a good pair.


They gave me a job in the afternoon of shredding paper. Tedious and time consuming so was glad to help out.

We had hot dogs on the grill and potato salad which DD had made enough to take to the Church for the pot luck after the VIPs sang at the church for their homecoming concert. DD had gone with them the week before to Chicago and area for several concerts. She is the costume caretaker . She doesn't have anyone in the chorus now but the director has gotten to used to having her won't let her quit. She loves it.

Dan and Angela two of my grandchildren were there for hot dogs on the 4th. Didn't go to any fireworks but after I went to bed I heard plenty of them going off.

Monday then was the concerts. Which was the one of the reasons I went down. Also it had been almost 4 years since I had been down there. Had never seen where DD was living.

On the way home I stopped to see an old friend in Annapolis. She had lost her husband a year ago and I had not seen her since. We'd talked on the phone. So that was a nice stop. Also I did what we so often did after coming home from an antique show or DD. stopped in Frederick at our favorite Chinese Resturant and had my late lunch, early supper. Was just nice to get out and drive someplace other than to Hagerstown.

Now will be getting ready for my cruise which leaves on the 25th. Brought my big suitcase up this morning from the basement. Now to start packing it. Lots of new clothes especcialy for the cruise.

When we get home from the cruise my DS will be here for a week and then we will have a memorial service and put DH to rest in his final resting place. He was cremated as wished and had been sitting on the hearth with his favoite bear watching over him.
Thanks for stopping by. Hope to get to this more often. Now this time the pictures went in where I wanted them.
Posted by Unknown at 2:50 PM

Eileen,
You are one busy lady these days- Sounds like a lovely time with your daughter- I know what you mean about paper shredding- we have been shredding paper for ages as there were papers from years back collecting forever it seems. Shredding them is important but tedious.
Where are you going on your cruise? I bet you will have a fantastic time.
Take care of yourself. Safe journeys .
Warmest regards,
Anna

Love your Charming Friends quilt, and the quilts for kids are adorable, too. Sounds like you are keeping very busy, and I hope you have a wonderful time on your cruise and get to try lots of yummy foods. I haven't been on a cruise, but I've heard that the food is very good on them.

Thank you for sharing your three new quilts! They will bring warmth and delight to all who receive them. Your Charming Friends is especially great to see and admire the quilting. Great Job!
Your days away sounded good and being surrounded by loved ones with good food - well what can be better, well maybe a cruise with loved ones and good food :o) You continue to inspire me.