Yes, I finished Carolina Christmas except I think I have to name it something different since I didn't use green and I set it differently from Bonnie's 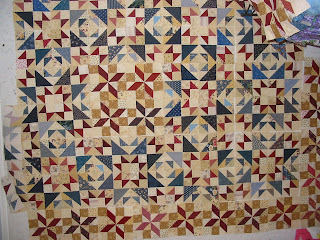 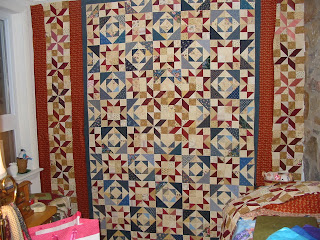 Then when my daughter came up she didn't like the red I had for the border. Said it was Orange. Nope it might be on the rust side but I liked it. Then my Granddaughter the artist said she didn't like the color either but maybe some blue might help. So this is the last that I could take on the board. Just not enough room for the rest of the borders. 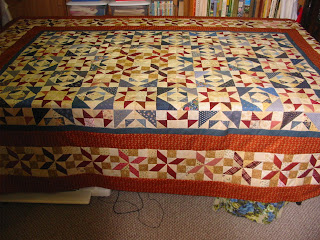 So I retreated to the basement and my double tables and Juki to sew on the borders.
All afternoon yesterday. Finally done. It measures 92 x 107. Those are 4 inch borders. Nice quilt for someones King Size bed. This was taken stretched out on the table. 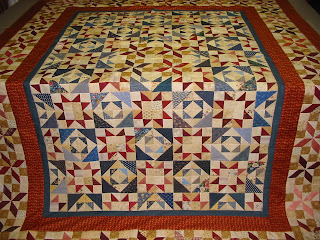 Then this one I turned it the other way and tried to get a better view of the center and the borders. Don't know when I will get it quilted. Might be a little hard to do on my machine. Time will tell. See if I have the money to send it out.
Now what do you think this quilt should be named.? Love some good suggestions.
I had a nice visit this afternoon with my Colorado Granddaughter and her other grandmother. They had been to an Aunts in Philadelphia for Christmas and the next two days in New York City seeing the Rockets and a show and shopping. Stopped on their way back to Virginia where her Grandmother lives and they are both flying back to Denver tomorrow. Sara is in her second year of collage in upstate Co. Wants to be a Fifth grade teacher.
Hubby is gradually improving. Probably be at least another week before he is out of the woods with the pneumonia. Then try again for home.
We've had some nice clear sunny days but OH so cold. Did you see that full moon out there tonight. ? Just heard on the news that it will be a Blue Moon on New Years Eve. Hope it is clear.
Everyone have a very Happy New Year

I love those sawtooth stars. I first thought of "Blue Stars over Maryland" but since it is surrounded by flowers and you are always showing us those pictures of your fabulous garden, maybe it should be "Blue Stars Over my Quilting Garden". Happy New Year to you too.

You quilt turned out beautifully! Good job, well done! Yes I did hear about the Blue Moon, my hubby is excited. Glad to hear that your hubby is doing better. Take care!

Oh my gosh it turned out lovely!!!! I have all the files saved... maybe I'll get this one done this summer.

How about -
Stars Shine On A Blue Winter Moon
I don't know....
What have you come up with?

I think that you work is beautiful. I want to touch your quilt. I am glad the your DH is moving toward getting better. I know it is hard on you both.

Yout quilt is absolutely lovely! I really like your imaginative way of setting the blocks together. Very pretty.

Simply gorgeous. I think you already named it. "Blue Moon" would be my vote.

Well aren't you the clever one Eileen- It is beautiful and as always, you did such a terrific job. That is one big quilt with lots of pieces!
Crowning Glory is the name that comes to mind as a name..

Wishing you and yours all the best in 2010.
Hugs,
Anna

Oh my goodness Eileen, this quilt top is looking entirely wonderful. Every time I see this 'Bonnie Mystery' I want to get busy immediately.
Glad to know your husband is feeling a little better. I've been thinking of you often. Hope this new year holds wonderful things for you both.
*hugs*
Tazzie
:-)

WOW... Your Carolina Christmas is beautiful. I like your color selection.

Wow, your version is beautiful. How about Snowy Blue Moon Christmas? Whatever you name it, it's gorgeous. I'm sewing blocks together now for mine, I decided to add sashing and hope mine is half as nice as yours. Mine is Iowa Christmas, because my mother loved Iowa. Hope your DH keeps doing better.

Your Christmas quilt is gorgeous! I admire such works and would love to have time to make some myself. May be this year..
Louise