I finished the leftover runner. By this I mean these pieces were in a baggie that I had put back after finishing a swap. All the saw teeth were triangles cut off the corners of a piece. Don't know what now but then I also has all these 4 patches. Guess I made too many. Just played around with them after sewing all the HST before I had gone to retreat. I found some of the blue in the stash so finished off with the triangle ends. It is all machine quilted and I just finished whipping down the binding. Took it along to the dentists office this morning while Hubby had 3 teeth pulled I got the sides whipped down. 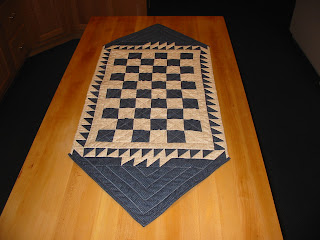 How do you like what I did at the seam in the ending? Couldn't let some of those HST go to waste. I took this on my island standing on a chair. The wall is still full of the mystery blocks. 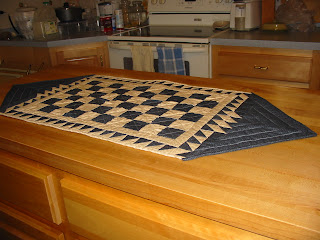 This is another angle. Could play checkers on it I guess.
Haven't had too much time in the sewing end. A little done on the butterflies but they will come along. This weekend might be easier. With Hubby not eating much but soft stuff that means I don't have to cook much. Made him some lemon jello and vanilla pudding so that will last a bit. He was not feeling good at all on Tues. and then had a procedure at the Urologist yesterday , eating a little but then this morning the teeth pulled has made for a rough week.
Hoping next week is better. So far the main thing is Water Aerobics is starting next Wed. I have sure missed it.
Then Wednesday 9-9-09 is my oldest granddaughters 21st birthday. She has just returned to her Senior year at Art School in Philadelphia,,
Happy Birthday Ashley. We love you and know you are going to do very well.
As I write this the western sky is so red. Almost as pretty as my heading picture.
Thanks for visiting.

great use of leftovers! I needed the inspiration--THANKS!! *~*CAROLE*~* (from the Hollow)

You are so cleaver how you put together scraps. I love that your table runner is just two colors. The solid blue tips really make the quilt. Good job. Sorry to hear about your husband getting teeth removed, I hope he feels better soon.

Your tablerunner is really pretty and I love the little extra touch on the ends. Very creative and tablerunners are so useful.

The table runner is beautiful. Great way to use up the scraps. The ends really make the quilt special.

The runner turned out great! Now I can see what you've been working on.

I think that the runner is fabulous- what a great way to use your leftovers. Perhaps you could play checkers on it Eileen. I love the end stitching - it was the perfect way to finish up the runner. School is very busy just now- I went in for about 3 hours yesterday and I need to spend some time today planning for next week.

Enjoy your swimming - Hope your hubby has not been feeling too miserable from the tooth removal.

What a pretty use of leftovers!