I was trying to get both of the mountains to show you but this is the only one that came through. Taken from the plane on our way from Vancover to Seattle all of a sudden this big mountain came into view. Had to be Mt Rainer. 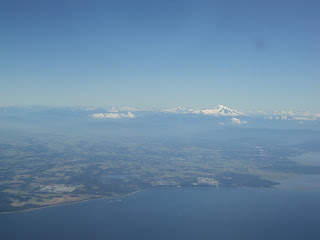 You will need to click on it to see it clear. I didn't realize we were almost to Saeattle. What a sight. I had started taking pictures as soon as we got in the air and I saw the mountains of Vancover and so got a good many of the city and country inbetween.
I also wanted to show you the kit I had gotten in Skagway. Guess it will have to wait until I get it sewn together. I have done some of the cutting as I figured it would be a whole lot easier than at retreat. Will save the sewing for there.
I also had a surprise package in the mail the other day. You know I've been making the little quilts every month for the Le Petite and this last month there were not many that made them and Carrie who usually gives at least one of the prizes. Decided that everyone would get a prize. Two plates and a little gift for. Primitive Gatherings. So nice of Carrie to do this. Now to o decide what to make with them. Would love to make one of the patterns in her second book but they all take
two plates. Maybe I can find someplace to get another one like the one I would really like to use.
I don't think it is out yet.
This weekend has been nice as DD found the time to come up before her hetic schedule of school begins. Today we went shopping for things to decorate her room with. So had fun and got very tired.
Maybe the next time I can get those other pictures. I put them someplace that I can't seem to pull up with this blogger . Found it was easier using Picasa so will have to take more pictures and put them in there. So until next time and thanks for stopping.